NATO to run Libya no-fly zone but not all action 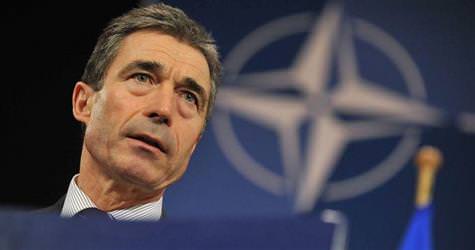 NATO countries agreed on Thursday to enforce a no-fly zone in Libya to protect civilians against Muammar Gaddafi's forces, but fell short of taking full command of all military operations in the North African state.

Secretary-General Anders Fogh Rasmussen told reporters after four days of grueling negotiations that the U.S.-led military alliance's mandate did not extend beyond enforcing an arms embargo and the no-fly zone, although NATO could also act in self-defense.

Turkey's foreign minister said earlier that NATO would take over command of all coalition military operations in Libya from the United States.

Asked whether NATO would be able to strike at ground forces or take action against Gaddafi, Rasmussen said, "At this moment, there will still be a coalition operation and a NATO operation."

He added that talks were continuing on giving NATO a broader role, "but that decision has not been made yet." In the meantime, there would be close coordination to avoid conflicts.

U.S. Secretary of State Hillary Clinton, who has been pushing President Barack Obama's effort to relinquish U.S. leadership of the Libya operation within days, said NATO was well placed to take over.

"NATO is well suited to coordinating this international effort and ensuring that all participating nations are working effectively together toward our shared goals," Clinton said after a deal that nevertheless appeared to leave significant responsibility on U.S. shoulders.

Earlier, Turkish Foreign Minister Ahmet Davutoglu told reporters, "The operation will be transferred completely to NATO and there will be a single command and control."

His comments came after a four-way telephone conference among Clinton and the foreign ministers of Turkey, France and Britain.

U.S. Vice Admiral Bill Gortney said in Washington that the United States was working very hard to hand over leadership of the coalition, possibly as early as this weekend.

Ambassadors agreed to initiate military planning for a no-drive zone to protect civilians in addition to the no-fly zone, diplomats said, but that would require a further political decision.

Earlier, Turkish leaders cast new suspicions on the motives behind Western intervention in Libya, suggesting action was driven by oil and mineral wealth rather than a desire to protect civilians from Gaddafi's forces.

Obama, already trying to extricate Washington from two wars in Muslim nations, Iraq and Afghanistan, has said Washington wants to hand over responsibility for the Libya campaign to NATO within days rather than weeks.

The effort got a further boost as French President Nicolas Sarkozy announced the United Arab Emirates would contribute 12 planes to the Libya coalition force, significantly increasing Arab participation in the campaign.
The Turkish parliament approved a decision to join a NATO naval operation to enforce a U.N.-sanctioned arms embargo off Libya by sending four frigates, a submarine and a support vessel for the naval operation.

But Turkey wants to be able to use its NATO veto to limit allied operations against the country's infrastructure and avoid casualties among Muslim civilians that it fears could result from bombing raids.

Davutoglu said those concerns had been addressed.

France, which launched the air campaign with Britain and the United States on Saturday, says NATO should provide its command structure while an ad hoc steering group of coalition members, including the Arab League, exercises political control.

A French diplomatic source said Paris had secured agreement for a 'strategy commission that will bring together all the contributing states." It would meet in London on Tuesday and provide the political direction for operations in Libya.

Paris has argued that having NATO in full charge would erode Arab support because of U.S. unpopularity in the Arab world.

On Thursday, French Foreign Minister Alain Juppe said it may take a coalition of Western powers days or weeks to destroy Gaddafi's military, but not months.

Turkish Prime Minister Tayyip Erdogan took a swipe at France on Thursday, saying the same people who were reluctant to let Turkey into the European Union now spoke in terms of "crusades" in Libya, referring to a loose comment by Sarkozy's interior minister.
He voiced suspicion that some seeking to act outside NATO had their eyes on Libya's oil, while President Abdullah Gul said the coalition lacked an agreed policy, planning and exit strategy, and Libya could be "looted" like Iraq.

"I wish that those who only see oil, gold mines and underground treasures when they look in that direction, would see the region through glasses of conscience from now on," Erdogan told a conference in Istanbul.

British Prime Minister David Cameron sought to assuage concerns about Western motives by saying the coalition should not stray beyond the U.N. resolution by targeting Gaddafi.

"It is very important we don't go beyond that in any way," he said when asked if the Libyan leader was a legitimate target.