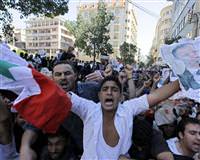 Thousands of mourners at a funeral for a Syrian killed in anti-government protests burnt a ruling Baath party building and a police station on Saturday as authorities freed 260 prisoners in a bid to placate reformists.

Syrian President Bashar al-Assad was facing the deepest crisis of his 11 years in power after security forces fired on protesters on Friday in the city of Deraa, adding to a death toll that rights groups have said now numbers in the dozens.

Hundreds gathered in the southern city's main square on Saturday chanting for freedom. Three young men climbed on the rubble of a statue of late President Hafez al-Assad which protesters had pulled down on Friday in a scene that recalled the toppling of Saddam Hussein's statue in Iraq in 2003 by U.S. troops.

The men had cardboard signs reading "the people want the downfall of the regime," a witness said.

In nearby Tafas, mourners in the funeral procession of Kamal Baradan, who was killed on Friday in Deraa, set fire to the Baath party building and the police station, residents said.

A human rights lawyer said that 260 prisoners, mostly Islamists, were freed after completing at least three-quarters of their sentences. Protesters have been demanding the freeing of political prisoners and the lifting of emergency law.

Dozens of people have been killed over the past week around Deraa, medical officials said. There were reports of more than 20 new deaths on Friday.

Such demonstrations would have been unthinkable a couple of months ago in this most tightly controlled of Arab countries.

The funerals of several protesters killed in Deraa on Friday took place in nearby villages on Saturday, residents said. It was unclear, however, how many had been killed.

Several thousand mourners prayed on Saturday over the body of 13-year-old Seeta al-Akrad in Deraa's Omari mosque, scene of an attack by security forces earlier in the week, and then marched over to a nearby cemetery in the old quarter.

Security forces were not in evidence at the procession, in which mourners chanted "the people want the downfall of the regime," a refrain heard in uprisings across the Arab world from Tunisia to Egypt to Yemen.

Emboldened by the lack of security, the mourners also chanted "strike, strike, until the regime falls."

Abu Jassem, a Deraa resident, said: "We were under a lot of pressure from the oppressive authority, now when you pass by (security forces), nobody utters a word. They don't dare talk to the people. The people have no fear anymore."

The unrest in Syria came to a head after police detained more than a dozen schoolchildren for scrawling graffiti inspired by slogans used by other pro-democracy demonstrators abroad.

Amnesty International put the death toll in and around Deraa in the past week at 55 at least. There was a chorus of international condemnation of the shootings of demonstrators.

But analysts said foreign nations were likely to tread carefully around Syria, which has a close alliance with Iran and links to Palestinian Islamist militant group Hamas and Lebanese Shi'ite political and military group Hezbollah.

Syria's allies in the region have yet to comment on events.

Bordered by Israel, Lebanon, Jordan, Iraq and Turkey, Syria and its 22 million people sit at the heart of a complex web of conflict in the Middle East.

"Syria is Iran's main ally in the Arab world. A fall of the regime would have consequences for Hezbollah and Hamas ... I'm not sure that the region's big powers would allow such a big shock," said Karim Emile Bitar, research fellow at the Paris-based Institute for International and Strategic Relations.

There were also protests on Friday in Damascus and in Hama, a northern city where in 1982 the forces of Assad's father killed thousands of people and razed much of the old quarter to put down an armed uprising by the Islamist Muslim Brotherhood.

Internally, rule by the Assads has favoured the minority Alawite sect, an offshoot of Shi'ite Islam, causing resentments among the Sunni Muslim majority.

"What happens requires that people reconcile together and not goad them against each other ... what's happening in Libya, do you want it to happen in Syria?" he told al al-Jazeera television, siding with the ruling party.

Edward Walker, a former U.S. ambassador to Egypt, said that friction made many in the establishment wary of giving ground to demands for political freedoms and economic reforms.

"They are a basically reviled minority, the Alawites, and if they lose power, if they succumb to popular revolution, they will be hanging from the lamp posts," he said.

"They have absolutely no incentive to back off."

Asked if there could be a repeat of Hama, deputy head of Middle East and North Africa Forecasting at Exclusive Analysis Faysal Itani, said such a severe crackdown was possible.

"There is a very real risk of such a thing happening. For a minority regime this is an existential struggle," he said, adding: "If the unrest continues at this pace the Syrian army is not going to be able to maintain cohesion."

Abdelhalim Khaddam, a former vice president who resigned and defected from the ruling Baath Party in 2005, said on Saturday "the blood of our martyrs will burn this regime."

Many believed a tipping point had been reached in Syria.

"The Syrian regime is attempting to make promises such as a potential lifting of the state of emergency, which has been in place since 1963, a record in the Arab world," Bitar said.

"But if this happens it will be the end of a whole system, prisoners will have to be released, the press will be free ... when this kind of regime considers relaxing its grip, it also knows that everything could collapse."

The government has accused armed gangs of being behind the violence and blamed them for the killing of civilians. But a Reuters reporter in Deraa said tens of thousands of people who marched on Friday during funerals appeared largely unarmed.

A serving Western diplomat said he had been surprised, however, by how far demonstrators had gone in taking to the streets to demand change. "They've crossed the fear line, which in Syria is remarkable," the diplomat said.

In the town of Sanamein, which is in the same area as Deraa, a resident told al-Jazeera that 20 people were killed on Friday when gunmen opened fire on a crowd outside a building used by military intelligence -- part of an extensive security apparatus that has protected Baath party rule since 1963.

Thousands of Assad's supporters waved flags, marched and drove in cars around Damascus and other cities to proclaim their allegiance to the Baath party and to Assad, whose father took power in a coup in 1970.

Assad had promised on Thursday to look into granting Syrians greater freedoms in an attempt to defuse the outbreak of popular demands for political freedoms and an end to corruption.

He also pledged to look at ending an emergency law in place since 1963 and made an offer of large public pay rises. Demonstrators said they did not believe the promises, however.