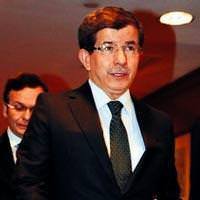 NATO should use its muscle when needed to ensure forces loyal to Muammar Gaddafi stop attacks on civilians and implement a ceasefire, Turkey's Foreign Minister Ahmet Davutoglu warned before a London conference on Libya.

"For that purpose, of course, there should be more pressure," Davutoglu told journalists who accompanied him to Britain for Tuesday's meeting.

Protecting the Libyan people so they can choose their own future is a bigger priority than forcing Gaddafi from power, he added.

Agreement on NATO taking full control of military operations over Libya had been delayed by Turkish concerns about civilian casualties.

Davutoglu said he expected technical preparations for NATO to take over the mission to be completed in one or two days. U.S. President Barack Obama said in a televised speech on Libya that NATO would take over full command from American forces on Wednesday.

More than 40 governments and international organisations were due to gather later on Tuesday to discuss humanitarian aid and lay groundwork for a post-Gaddafi Libya.

The Turkish minister hinted that Gaddafi could make the final outcome less hard on himself if he implemented a truce.

"Of course, if there is a ceasefire it will be a test for him," Davutoglu said. "If he respects a ceasefire and if he stops attacking civilians, then other things should follow afterwards."

Davutoglu had been in Baghdad on Monday as part of a delegation led by Prime Minister Tayyip Erdogan to build Turkey's political and economic ties with Iraq.

"The people of Iraq suffered a lot, and we should get a lesson out of this," Davutoglu said.

Many more dead civilians, a dangerous power vacuum and Libya's break up were potential scenarios unless lessons from Iraq and Afghanistan were learned, Davutoglu said.

This time, he said, there must be an end game.

"In Iraq and Afghanistan, we had the experience of a military operation without a political objective," Davutoglu said.

The only major Muslim member of NATO, Turkey has cultivated strong relationships with fellow Muslim countries in the region under Erdogan, while ties with former friend Israel have soured.

Turning to the unrest and killing of protesters in neighbouring Syria, Davutoglu said Erdogan had spoken twice to President Bashar al-Assad in the past three days.

"They must achieve transformation in a peaceful manner," he said. "Our message is strong and clear."