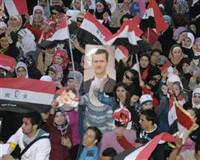 Syrian forces fired into the air on Monday to disperse a pro-democracy protest in the southern flashpoint city of Deraa, where reformists want to overthrow the 41-year rule of the Assad family.

More than 60 people have been killed so far in the crackdown in the city on the Jordanian border that poses the most serious challenge to President Bashar al-Assad. Residents said security forces' snipers were on rooftops.

Assad has yet to speak publicly on the protests, which have spread to the northern port of Latakia, Hama in central Syria and other towns, but officials say he will make a speech in the next two days amid speculation he could lift emergency rule.

Crowds converged on Deraa's main square on Monday, chanting: "We want dignity and freedom" and "No to emergency laws".

Security forces fired sustained bursts into the air for several minutes in the direction of demonstrators, but the protesters returned once firing stopped, residents said. It was not immediately clear if there had been casualties.

Assad's crackdown on what his officials say are armed groups has drawn international condemnation as protesters, emboldened by uprisings in Tunisia and Egypt, confronted the security system of one of the most tightly controlled Arab countries.

Amnesty International said on Friday that at least 55 people had been killed in the Deraa area, based on "credible sources".

On Monday it cited unconfirmed reports as saying 37 more people had been killed since then in protests in Damascus, Latakia, Deraa and elsewhere.

Deraa, surrounded by poor agricultural communities, is a bastion of tribes belonging to Syria's Sunni Muslim majority who resent the power and wealth amassed by an elite from the Alawite minority to which the Assads belong.

A statue of the late president Hafez al-Assad, the president's father, was toppled last week before security men in plain clothes opened fire with automatic rifles from buildings.

People have also turned out on the streets of Hama, where in 1982 the forces of Hafez al-Assad killed thousands of people and razed much of the old quarter to crush an armed uprising by the Islamist Muslim Brotherhood.

Bashar al-Assad, 45, now faces calls to lift emergency law that have been used since 1963 to stifle political opposition, justify arbitrary arrest and give free rein to a pervasive security apparatus.

Protesters want political prisoners freed, and to know the fate of tens of thousands who disappeared in the 1980s.

Deraa residents said the army and secret police sent forces to the city on Monday. Police had been making arrests and 20 state security buses were parked on the town's main bridge.

"(Security forces) are pointing their machine guns at any gatherings of people in the area near the mosque," said a trader. The Omari Mosque has been a focal point of protest.

Abu Tamam, a resident whose house overlooks the mosque, said soldiers and state security forces were crowded together outside the mosque. Another resident said snipers were on key buildings. "No one dares to move," he said, before Monday's demonstration.

Such demonstrations would have been unthinkable a couple of months ago in Syria, where the Baath Party has been in power for nearly 50 years but now faces the wave of Arab revolutionary fervour that toppled the leaders of Egypt and Tunisia.

Vice President Farouq al-Shara said Assad would make an important national address in the next two days that would "reassure the people", but diplomats were not sure how the British-educated eye doctor would react to the crisis.

"I think he is not decided on whether to go on television and try to defuse the situation or choose an even more brutal crackdown route," a senior diplomat in Damascus said.

"I do not see Assad scrapping emergency law without replacing it with something just as bad," he said.

"With regard to lifting emergency law, this is misleading and a trick," Maamoun al-Homsi, who was jailed for five years for demanding political freedom, said from exile in Canada. "Lifting it will not prevent homes being raided in Syria."

"Instead of emergency law, there'll be an anti-terrorism law," he said, citing "people close to the Assad regime".

Assad deployed the army in Latakia, Syria's main port and home to a large garrison, for the first time on Sunday after nearly two weeks of protests, signalling government alarm about the ability of state security forces to keep order there.

The city has a fortress-like secret police headquarters and a potentially volatile mix of Sunni Muslims, Christians and Alawites. A leading opposition figure said on Monday that Sunni and Alawite leaders had met to try to curb sectarian violence.

"The situation appears calm today after religious and civil society figures intervened. I was told buses are running and businesses have re-opened in the main university district of Latakia," Aref Dalila told Reuters by telephone from Damascus.

After the Latakia violence, a senior aide to Assad said Syria was the target of a project to sow sectarian strife.

"It is easy to play the sectarian card in these circumstances," said Dalila, once a dean of economics at Damascus University and a former political prisoner who objected to what he termed monopolies granted by Assad to his relatives.

"I hope the regime will choose an exit from this crisis that will spare Syria more bloodshed," Dalila said.

Leading Syrian opposition figures issued a declaration on Monday denouncing sectarianism and committing to non-violent democratic change in the wake of disturbances in Latakia.

The government says its forces have opened fire only when "armed elements" have threatened national security. An official statement said 12 people were killed in Latakia at the weekend.

As Western pressure grew on Syria, which has a close alliance with Iran, Turkish Prime Minister Tayyip Erdogan said on Monday that Assad had not given him "a negative answer" when he urged him to listen to his people.

"We did not receive a negative answer when we urged Mr Assad to listen to the voice of people. I hope he makes the announcement today or tomorrow."

Relations between Turkey and Syria have improved since Erdogan's AK Party came to power, while Turkey's old friendship with Israel has soured. "It is impossible for us to remain silent in the face of these events, we have an 800 km (500 mile) long border with Syria," Erdogan said.

Syria also has links to the Palestinian Islamist militant group Hamas and the Lebanese Shi'ite political and military group Hezbollah.