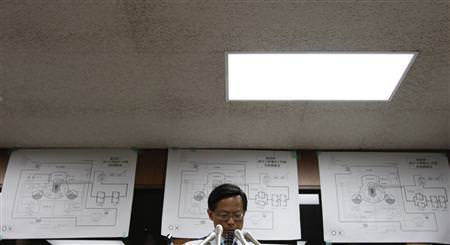 Japan said there was no end in sight to the crisis at its earthquake-wrecked nuclear power plant on Wednesday as a spike in radioactive iodine levels in seawater added to evidence of reactor leakages around the complex and beyond.

Plutonium finds in soil at the plant have raised public alarm over the world's worst nuclear accident since Chernobyl in 1986, which has overshadowed the humanitarian disaster triggered by an earthquake and tsunami on March 11 that left 27,500 people dead or missing.

France and the United States will help Japan in its battle to contain radiation but authorities said they still had no idea when they would be able to stabilize the facility, 240 (150 miles) north of Tokyo.

"We are not in a situation where we can say we will have this under control by a certain period," Chief Cabinet Secretary Yukio Edano told a briefing.

New readings showed a spike in radioactive iodine in the sea off the plant to 3,355 times the legal limit, the state nuclear safety agency said, although it played down the impact, saying people had left the area and fishing had stopped.

Pollution of the ocean is a concern for a country where fish is central to the diet.

Experts say the vastness of the ocean and a powerful sea current should dilute high levels of radiation, limiting the danger of contamination to fish and other marine life. However, just how radiation is spilling into the ocean is unclear and controlling leakage from the plant could take weeks or months, making precise risk assessments very difficult.

Prime Minister Naoto Kan, whose government faces mounting criticism for its handling of the disaster, won assurances of American support in a telephone conversation on Wednesday with U.S. President Barack Obama.

The United States has already agreed to send some radiation-detecting robots to Japan to help explore the reactor cores and spent fuel pools at the stricken nuclear plant.

French President Nicolas Sarkozy, who chairs the G20 and G8 blocs of nations, plans to visit Tokyo on Thursday. He will be the first foreign leader in Japan since the disaster.

A global leader in the industry, France produces about 75 percent of its power from reactors so it has a strong interest in helping Japan get through the Fukushima disaster.

Hundreds of engineers have been toiling for nearly three weeks to cool the plant's reactors and avert a catastrophic meltdown of fuel rods, although the situation appears to have moved back from that nightmare scenario.

Jesper Koll, director of equity research at JPMorgan Securities in Tokyo, said a drawn-out battle to bring the plant under control and manage the radioactivity being released would perpetuate the uncertainty and act as a drag on the economy.

"The worst-case scenario is that this drags on not one month or two months or six months, but for two years, or indefinitely," he said. "Japan will be bypassed. That is the real nightmare scenario."

Public fears rose a notch on Tuesday with the announcement that plutonium traces had been found in soil from five places within the facility.

A by-product of atomic reactions and a prime ingredient in nuclear bombs, plutonium is highly carcinogenic and one of the most dangerous substances on the planet, experts say.

Japan said, however, that only two of the plutonium traces had likely come from the plant, probably from overheating spent fuel rods or damage to reactor No. 3, with the others being particles in the atmosphere from past nuclear testing abroad.

The levels, of up to 0.54 becquerels per kg, were not considered harmful, Japanese officials said, a stance supported by the U.N. atomic agency.

Plant operator TEPCO is under pressure, criticized for safety lapses and a slow response.

Its shares slid another 17.7 percent on Wednesday and are now down about 75 percent since the earthquake, as the government considers nationalizing Asia's largest utility.

The beleaguered company's president, who has kept a low profile throughout the crisis, was taken to hospital on Wednesday suffering from high blood pressure and dizziness.

The government, too, is taking heat.

Already criticized for weak leadership during Japan's worst crisis since World War Two, Kan has been blasted by the opposition for his handling of the disaster and for not widening the exclusion zone beyond 20 km (12 miles) around Fukushima.

Kan said he was considering that step, which would force 130,000 people to move, in addition to 70,000 already displaced.

With entire towns on the northeast coast reduced to wastelands of mud and debris following the quake and tsunami, more than 175,000 people are living in shelters.

The event looks likely to be the world's costliest natural disaster, with estimates of damage topping $300 billion.

Workers at the Fukushima complex may have to struggle for weeks or months under extremely dangerous conditions to restart cooling systems vital to controlling the nuclear reactors.

More than a dozen workers have been injured at the plant, and they are said to be living in grim conditions, sleeping on the floor of a safe room when their shifts are over, and shoving packaged food down quickly to avoid contact with radiation.

At the site, highly tainted water has been found in some reactors and in concrete tunnels outside and shipments of milk and some vegetables from areas nearby have been stopped.

Radiation has been found in tap water in Tokyo, 240 km (150 miles) to the south, and in tiny traces abroad.

Experts have said a lack of information and inconsistent data make it hard to understand what is happening at Fukushima.

Engineers face a dilemma: they have to douse the reactors to prevent overheating, but that risks adding to the radiation problems by increasing water flows.

"If they need to increase cooling, it will increase runoff of highly contaminated water and they don't have any place to store it," said Edwin Lyman of the U.S.-based Union of Concerned Scientists, a long-time nuclear watchdog group.

"They may have to make hard choices about releasing larger quantities of radiation to the environment ... There may not be any good choices."

Nuclear plant operators might in future be forced to install backup power in case external power is knocked out, a nuclear safety agency official said.