Syria's Assad to give first speech since protests 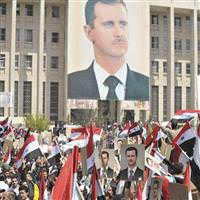 President Bashar al-Assad will on Wednesday give his first public speech since pro-democracy protests in which more than 60 people have been killed erupted in southern Syria and swept through the country.

The state news agency said Assad would address "the internal issues and the latest occurrences." There has been speculation he will announce the lifting of emergency law, a key demand of the protesters.

Emergency laws have been used since 1963, when his Baath Party took power in a coup, to stifle political opposition, justify arbitrary arrest and give free rein to a pervasive security apparatus in the country of 22 million.

Assad sought to deflect the challenge to his 11-year rule posed by two weeks of protests on Tuesday by mobilising tens of thousands of Syrians in mass rallies across the country and accepting the resignation of his government.

Sacking the government is seen as a cosmetic change since it has little authority in Syria, where power is concentrated in the hands of Assad, his family and the security apparatus.

However, Syrian officials, civic rights activists and diplomats doubted that Assad, who contained a Kurdish uprising in the north in 2004, would completely abolish emergency laws without replacing them with similar legislation.

"Assad is being subjected to internal and external pressures. He has prepared a plan to give the impression to public opinion that he has begun reforms," Maamoun al-Homsi, who was jailed for five years for demanding broader political freedoms, told Reuters from exile in Canada this week.

Arbitrary arrests have continued across Syria in large numbers since Assad made it known through an adviser he was considering scrapping the law, lawyers and activists said.

Protesters at first limited their demands to more freedoms.

But, increasingly incensed by a security crackdown on them, especially in the southern city of Deraa where protests first erupted, they later demanded the "downfall of the regime."

Deraa is a centre of tribes belonging to Syria's Sunni Muslim majority, many of whom resent the power and wealth amassed by the elite of the Alawite minority to which Assad belongs. The government has said Syria is the target of a plot to sow sectarian strife.

The government-organised show of mass support on Tuesday suggested Assad was seeking to address his people from a position of strength, adopting a strategy to counter unrest that was once unthinkable in the tightly controlled Arab state.

State television showed people in the Syrian capital Damascus and cities including Aleppo, Hama, Homs and Tartus waving the national flag and pictures of Assad and chanting "God, Syria, Bashar" in what were dubbed "Loyalty Marches."

Members of unions controlled by the Baath Party said they had been ordered to attend the rallies, where there was a heavy security presence.

All gatherings and demonstrations not sponsored by the state are banned and media organisations operate under restrictions.

The government has expelled three Reuters journalists in recent days -- its senior foreign correspondent in Damascus and a two-man television crew who were detained for two days before being deported to their home base in neighbouring Lebanon.

Assad's crackdown on protests has drawn international condemnation, including from the United States and close ally, neighbouring Turkey. But, Syria is unlikely to face the kind of foreign military intervention seen in Libya.

"We believe President Assad is at a crossroads," the U.S. State Department's spokesman Mark Toner said on Tuesday. "He has claimed to be a reformer for over a decade but he has made no substantive progress on political reforms and we urge him to ... address the needs and the aspirations of the Syrian people."

The British-educated president was welcomed as a "reformer" when he replaced his father in 2000. He allowed a short-lived "Damascus Spring" in which he tolerated debates that criticised Syria's autocratic rule, but later cracked down on critics.