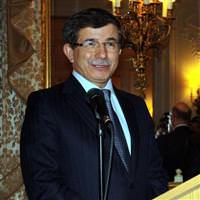 Turkish Foreign Minister Ahmet Davutoglu said on Wednesday a new era was sweeping the Middle East and it was up to its leaders to embrace change or risk being cast away.

He dismissed allegations by many Arab autocrats that an unprecedented wave of uprisings that toppled leaders in Tunisia and Egypt and inspired masses across Libya, Yemen, Bahrain and Syria was the work of "foreign elements."

Davutoglu said the Middle East was passing through a political and social upheaval like that which gripped Eastern Europe in the 1990s and toppled a series of communist dictators.

"In the region there is an era of change," Davutoglu told Reuters in an interview. "It is like Eastern Europe in the late 1990s. Once there is a popular demand in a region, each country is being affected by these demands."

The world, he said, was changing and a young generation of Arabs "wanted more dignity, more economic prosperity and more democracy."

"This a new era that will bring many challenges, many opportunities and many risks."

"It is up to these leaders to maximize the opportunities and minimize these risks," he added.

Davutoglu was speaking a day after an international coalition in London piled pressure on Libyan leader Muammar Gaddafi to quit, resolving to continue military action against his forces until he complies with a U.N. resolution.

Many young Arabs look to Turkey as an example of a Muslim country making democracy work within a secular framework, thanks to far reaching reforms undertaken in the last eight years by a ruling party that emerged from Islamist parties a decade ago.

"We don't have any evidence. In Tunisia, Egypt, Libya, Syria, Bahrain and Yemen, in all these countries, it was a genuine start."

He said Mohamed Bouazizi, the Tunisian vegetable seller who set himself alight in protest after a policewoman slapped and hurled insults at him was "an ordinary Tunisian."

"If we think all these issues are led by foreign elements then it means we think that Arab individuals and societies cannot demand change or do something alike."

"Ordinary Arabs, young Arabs, men and women, want to have more dignity, more freedom, more participation in politics. I think the demand for change is genuine."

"We should understand those voices in Tahrir square, in Tunisia and elsewhere. Then we can prepare for the future."

Davutoglu made his comments just before Syrian President Bashar al-Assad told parliament in his first speech since protests erupted that they were the result of a "foreign plot."

He said Turkey had several consultations with neighboring Syria as the challenge to Assad's 11-year rule grew.

"We're supporting reforms and democratization but it should be a peaceful transformation, not through violence, attacks against civilians, or by trying to keep the status quo or by creating instability."

In his speech Assad disappointed hopes that he would lift an emergency law in place for 48 years and allow political parties and freedoms. He offered no new commitment to change Syria's rigid, one-party political system.

Davutoglu looked toward a new era in the oil-rich North African country once Gaddafi is persuaded his time is over.

"A prolonging of civil tension or a divided Libya, the status quo, these are not good options. And Gaddafi should understand this as well," Davutoglu said.

"There should be a new era of Libya, based on the aspirations of people."

But first the international community, using NATO's military muscle, needed to halt attacks on civilians and achieve a ceasefire while also working on a parallel political process so that the people could decide their future.

Turkey's efforts to draw Gaddafi toward an "exit strategy" were ruined by the inclusion an International Criminal Court investigation of the Libyan leader.

Davutoglu described the situation in Yemen as "quite critical."

Without directly answering whether Turkey supported a U.S. proposal for President Ali Abdullah Saleh to step down and go into exile along with his family, Davutoglu said the main objective was to keep Yemen united and avoid sectarian conflict.

"In that sense there has been such a process in Yemen for political change. There's momentum and we support that change," Davutoglu said.

Turkey has also been drawn into intense diplomatic efforts to dampen simmering tensions in Bahrain that has sprung from the Sunni-Shi'ite divide, with the Shi'ite majority demanding an end to what they say is discrimination in jobs and benefits.

Davutoglu said he will visit Bahrain next week to see the situation on the ground and encourage reforms, having spoken with ministers from Bahrain, Saudi Arabia, the United Arab Emirates and Iran in order to ease the tension.