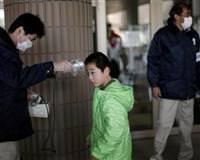 Pressure grew on Thursday for Japan to expand an evacuation zone round its stricken nuclear plant where radiation hit 4,000 times legal limits in nearby sea and hindered the battle to contain the world's worst atomic crisis since Chernobyl.

The quake and tsunami that battered the Fukushima Daiichi plant have also left more than 27,500 people dead or missing and are taking a heavy toll on the world's third-biggest economy.

First data on the impact of the March 11 disasters showed manufacturing slumped the most on record this month as factories shut and supply chains were disrupted, especially in the car and technology sectors for which Japan is renowned.

Damage may top $300 billion, while a Wall Street bank said nuclear-related compensation claims may be over $130 billion.

At least Japan was receiving some foreign help at its biggest time of need since World War Two : French President Nicolas Sarkozy flew into Tokyo in the first such show of solidarity by a foreign leader since the crisis.

On arrival, he called for a May meeting of nuclear power watchdogs from G20 nations to set new global industry standards.

Both the U.N. nuclear watchdog and Japan's own nuclear safety agency have advised Prime Minister Naoto Kan's government to consider widening the 20-km (12-mile) zone round the Fukushima Daiichi plant on the northeast Pacific coast.

High radiation was detected at twice that distance away.

Government officials are pleading for Japanese, and the world, to avoid overreaction to what they say are still low-risk levels of radiation away from the plant. But opposition politicians have lambasted Kan for sticking with the original exclusion area

"We have advised (Japan) to carefully assess the situation," said Denis Flory, a deputy director general of the International Atomic Energy Agency (IAEA).

The U.N. body said radiation at Iitate village, 40 km (25 miles) from the plant, exceeded a criterion for evacuation.

Japan's chief Cabinet Secretary Yukio Edano said the government was reviewing the issue daily but "at this moment, no decision to expand the evacuation area has been made."

Consistently high levels of radiation found in the sea near the complex could mean radiation is leaking out continuously, Japan's nuclear watchdog said. The source is still unknown, adding to the headaches for engineers on the site.

Radioactive iodine in seawater near drains running from the plant was 4,385 times more than the legal limit, the highest recorded so far during the crisis.

In a sign of the extraordinary times Japan is living, one newborn baby's first medical appointment was not with a pediatrician but a Geiger counter.

"I am so scared about radiation," Misato Nagashima said as she took her baby Rio, born four days after the earthquake and disaster, for a screening at a city in Fukushima prefecture.

France, the world's most nuclear-dependent country, has flown in experts from state-owned nuclear reactor maker Areva, while the United States and Germany have offered robots to help repair the damaged Daiichi nuclear plant.

Concern over radiation beyond Japan grew further after Singapore detected radiation nine times the limit in cabbages from Japan, while the United States reported "minuscule" levels of radiation in milk samples on its west coast.

"These types of findings are to be expected in the coming days and are far below levels of public health concern, including for infants and children," the Food and Drug Administration and the Environmental Protection Agency said.

Contaminated milk was one of the biggest causes of thyroid cancers after the 1986 nuclear accident in Chernobyl because people near the plant kept drinking milk from local cows.

Several nations have banned milk and produce from areas near the damaged nuclear plant, 240 km (150 miles) north of Tokyo. Japan has itself stopped exports of vegetables and milk there.

While food makes up only 1 percent of Japan's exports, the nuclear emergency poses a risk to an economy burdened with public debt twice the size of its $5 trillion dollar economy and a fast aging population.

Japan has called on World Trade Organization nations not to impose "unjustifiable" import curbs on its goods.

Tokyo is desperate to minimize the already shocking impact of the crisis - it says damage could be more than $300 billion, which would make it the world's most costly natural disaster.

Experts say the battle to control Fukushima's six reactors could take weeks, if not months, followed by a cleanup operation that may drag for years.

Plant operator Tokyo Electric Power Co could face compensation claims of up to 11 trillion yen ($133 billion) -- nearly four times its equity -- if the nuclear crisis drags on for two years, an analyst at Bank of America Merrill Lynch said.

As operators struggle to regain control of the damaged reactors, nuclear experts said the continued lack of a permanent cooling system was hindering efforts to cool down fuel rods.

Workers have been forced to pump in seawater to cool the rods, but this creates contaminated seawater around the stricken plant and is making it difficult to reconnect the plant's internal cooling system which contains radiation.

Daily readings published by the government show that 30 km northwest of the reactors levels are climbing up to 42 microsieverts per hour, about 6 times the cosmic radiation experienced during a Tokyo-New York flight.

Elsewhere at that distance around the reactor it is just 1.0-1.2 microsieverts per hour.

A Reuters reading in downtown Tokyo on Thursday showed a radiation level of 0.18 microsieverts per hour. This is still quite low by global standards as Japan has lower levels of natural background radiation than other places.