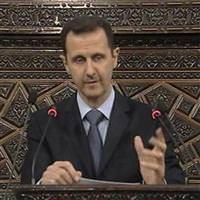 Syrian President Bashar al-Assad has a better chance of surviving in power than the fallen authoritarian rulers of Egypt and Tunisia, provided he moves soon from repression to reform.

His security forces have cracked down on pro-democracy protests that began in Syria two weeks ago and he has brought supporters out on the streets to declare their loyalty.

He has given a speech blaming foreign conspirators for the unrest, but unlike Tunisia's Zine al-Abidine Ben Ali and Egypt's Hosni Mubarak, he has made no concessions to reform.

Banking on the loyalty of his pervasive security forces, muted criticism from the West and support from Gulf Arab countries and regional ally Iran, Assad has gambled he can ride out the revolutionary wave sweeping the Arab world.

But unless he implements serious reforms — from lifting a decades-old emergency law, to granting political and media freedoms — he may get only a temporary reprieve and could soon face the fate of the ousted Egyptian and Tunisian leaders.

"He has to implement amazing reforms to ride out the wave (of discontent). He should not take risks."

The protests that began in the southern, mostly Sunni city of Deraa and later spread to other cities including Latakia and Hama, first called for more freedom and less corruption, becoming more directly critical of Assad as deaths mounted.

But for now, they do not seem to pose a serious challenge to Assad's 11-year rule.

Pandora's box
Syria borders on Iraq, Jordan, Lebanon, Turkey and Israel, and is thus entangled in a number of regional conflicts.

Neighbours have held back from criticising Assad for fear that sectarian conflict could break out in Syria and spread to their own countries.

There is much resentment against Assad's minority Alawite community, an offshoot of Shia Islam, among Syria's Sunni Muslim majority. Assad has favoured his own sect in distributing power, wealth and business contracts.

Sunni-ruled Gulf Arab monarchies, already grappling with a mostly Shia protest movement in Bahrain, where the ruling Sunnis are in a minority, want Assad to keep sectarian peace.

Playing on these concerns, Syria has said it was the target of a foreign plot to sow sectarian strife and the 45-year-old, British-educated president has in recent days received messages of support from Gulf rulers.

"If Syria explodes, Iraq will explode, Jordan will explode and Lebanon will go down the drain. We could witness a Sunni-Alawite civil war that would immediately spread in the Arab world as Sunni-Shia," said political scientist Hilal Khashan of the American University in Beirut.

"Syria will open a pandora's box of troubles."

The United States, entangled in prolonged conflicts in Iraq and Afghanistan, and now an air campaign against Libyan leader Muammar Gaddafi, will be reluctant to take a hard line.

Washington described Assad's speech on Wednesday, in which he failed to spell out reform plans and justified the use of force against demonstrators, as "lacking substance". But it said it was up to the Syrian people to judge the speech.

On Thursday, Damascus announced several committees to study grievances including the 48-year emergency law and a 1962 census in the eastern region of Hasaka which resulted in 150,000 Kurds now living in Syria being denied nationality. It also said there would be an investigation into the deaths in Deraa.

Washington has blamed Syria for meddling in Lebanon and criticised its support for Iran and and militant groups Hamas and Hezbollah. But a U.S. ambassador returned to Damascus in January after a nearly six-year absence, in an effort to lure the Syrians away from an Iranian-led anti-Israeli axis.

Some analysts say Gulf monarchies, the United States and Israel all have an interest in seeing Assad remain in power to safeguard fragile regional stability.

"The Gulf states want him to stay, the US may not like him but it doesn't want to see him go (for fears of civil war), and the Israelis see him as the best Arab dictator," Khashan said.

Loyal security forces, fragmented opposition
Unlike in Tunisia and Egypt, where the army refused to heed presidential orders to use lethal force to contain protesters, Syrian security forces have so far shown no qualms in firing live ammunition to quell demonstrations.

Rights groups say 61 people have been killed. Leading opposition figure Maamoun al-Homsi told Reuters on Sunday he had the names of 105 dead.

Much of the security apparatus elite are from Assad's close-knit Alawite group and would be loath to see power taken away from them and handed to Sunnis.

"Even if the protests spread, the regime has an impressive machine of coercion. They can deal with it," Khashan told Reuters.

"Casualties were extremely high against a small number of protesters, so that tells you about the determination of authorities in crushing protests. Assad knows he has the security forces on his side."

Syria has a history of ruthless suppression of dissent. The president's father, Hafez al-Assad, wiped out an armed Islamist uprising in Hama in 1982, killing an estimated 20,000 people.

That may help explain why protesters in places such as the port city of Latakia and Hama have numbered a few hundred and sometimes a few dozen, unlike the huge crowds seen in uprisings in Tunisia, Yemen, Egypt and even Bahrain.

Protests have also abated in recent days, although there was a rally in Latakia following Assad's speech and an opposition figure also reported a demonstration in Deraa, which Reuters could not independently verify.

Syria has also stepped up the arrest of dissidents that began during the Tunisia and Egypt uprisings. While some have been freed, there are reports of mass arrests in recent days.

Beyond well-known civic and human rights activists, lawyers and journalists, the opposition is not clearly known nor are their strategies or capacity to organise mass demonstrations.

"The security forces are closely tied to the elite and the demonstrations are rather limited in scope, but all of this might change," said political commentator Rami Khoury.

Online activists have called for protests on a "Friday of Dignity". The world will be watching, but the momentum may not be with the protesters.

"The time is not yet ripe for change in Syria," Khashan said.