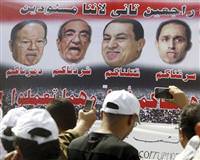 Egypt's military, in charge since an 18-day popular revolt ousted President Hosni Mubarak on Feb. 11, has moved swiftly to amend the constitution to open out politics and set a September date for parliamentary elections.

Egypt's political landscape has been transformed but the prospect of swift elections favours existing organisations -- putting remnants of Mubarak's ruling party and an established Islamist group in the driving seat for now. Reformers worry their revolution is being hijacked.

But many ordinary Egyptians are tired of turmoil. The referendum on March 19 when 77 percent of voters backed the army's amendments against those who wanted a new constitution was seen by analysts largely as a vote for stability.

Here are some of the main political risks ahead:

* ROLE OF THE MILITARY:

The Supreme Council of the Armed Forces, handed power by Mubarak when he stepped down on Feb. 11, has seemed eager to transfer it back to civilians after a brief transition.

The armed forces were the only pillar of the establishment to survive intact after Mubarak's ruling party collapsed and the police crumbled in the face of people power in the streets.

Assuming civilian rule is restored, the military, which controls a big chunk of the economy, will want to preserve its privileges and may seek a background role as national guardian.
That could lead to tension with civilian governments as it has in Turkey, whose military has ousted four governments since 1960, although reforms in recent years have curbed its power.

The military, viewed with approval for its role in Mubarak's removal, may want civilians to take responsibility for tough decisions that will deflate some of the wild expectations of some Egyptians about rapid improvements in living standards.

The unrest has disrupted the economy. The budget deficit is climbing, tourists have abandoned Egypt and strikes have flared in defiance of a military ban on industrial action.

The army, in response to popular pressure, has vowed to stop any "counter-revolution" from hijacking Egypt's revolution, but genuine democratic institutions have yet to be forged.

* Whether the government shifts to more populist policies that will add to spending and further strain the budget.

* How a campaign against corruption unfolds. Signs that a campaign to hold former officials to account turns into a more random "witch hunt" could deter even legitimate business.

* Whether reformers seeking deeper change can muster the numbers to regain momentum. They have not been able to repeat the huge numbers across Egypt that tossed out Mubarak.

* How the authorities react to a draft law on strikes and protests that reformers say stifle free speech. Any heavy-headed action by the army or security forces could spur on protests.

The military has set parliamentary elections for September, with presidential election by the end of the year.

The short electoral timetable allows little time for political parties to organise in the vacuum left by Mubarak, who crushed dissent, blocked the creation of new parties and ensured that legal opposition parties posed no serious challenge.

The Muslim Brotherhood, repressed but semi-tolerated under Mubarak, is the best-organised group. It says it will not run a presidential candidate or seek a parliamentary majority.

Remnants of Mubarak's old party network of notables in rural areas, local council officers and business executives are in a position to launch and finance a broad campaign.

It is not clear whether the youthful leaders of a mass protest movement in which national pride trumped religious allegiance can translate that into a coherent political movement -- or even whether they want to.

* Whether liberal-oriented youth groups and other protest movements can build an coherent challenge to remnants of Mubarak's establishment and the Brotherhood.

The Brotherhood ran independent candidates for parliament under Mubarak because as a religious group it was banned from setting up a party. It draws most of its support from the middle and lower-middle classes and runs a social welfare network.

Ever-cautious, it was slow to join the anti-Mubarak revolt, fearing a crackdown, but gradually took a more prominent role.

The Brotherhood's popularity is unclear in the absence of reliable opinion polls. Some of its leaders favour the political arena, others prefer a gradual approach to winning over society to its vision of a pluralistic, democratic, Islamic state.

Political power might even sully its reputation, given the difficulty any government will face in meeting the huge economic and social challenges ahead. The Brotherhood's real intentions remain unclear and its commitment to democracy untested.

Other Islamic trends include al-Gama'a al-Islamiya (Islamic Group) whose armed struggle in the 1990s was crushed by security forces. The group held its first meeting in 15 years after the fall of Mubarak and upheld a vow of non-violence.

Egypt's Salafists, who take a conservative view of Islam, are also emerging from repression under Mubarak.

* Progress in plans by the Muslim Brotherhood or other Islamist trends to form political parties.

The uprising in Egypt, a key U.S. ally with a peace treaty with Israel, fuelled revolts against other autocrats in the region. Progress towards democracy in the Arab world's most populous nation will also have an effect on its neighbours.

Tens of thousands of Egyptians are among expatriate workers fleeing Libya. They will have to be repatriated and somehow absorbed in an economy already struggling to create jobs. Two fifths of Egypt's 80 million people live on less than $2 a day.

The military has said it will uphold Egypt's international obligations, which include the 1979 peace treaty with Israel. The new foreign minister, Nabil Elaraby, has also warned Israel against rushing towards any military action against Gaza over a recent exchange of fire between Israelis and Palestinians.

* What happens to the border with Hamas-ruled Gaza, kept largely shut under Mubarak in line with Israel's economic siege.