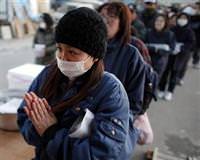 The following lists the impact of the earthquake and tsunami that rocked the northeast coast of Japan on March 11 and the subsequent crisis at a nuclear power plant.

* More than 161,600 people were in shelters around the country as of 1100 GMT on Sunday following evacuation, the National Police Agency said.

The government has set up an evacuation area around a quake-stricken nuclear plant in the northeast with a 20-km (12-mile) radius. More than 70,000 people lived in a largely rural area within the 20 km zone. It is unclear how many of them have been evacuated, but most are believed to have left.

Another 136,000 people were within a zone extending a further 10 km in which residents are recommended to leave or stay indoors.

* A total of 167,700 households in the north were without electricity as of 0700 GMT on Sunday, Tohuku Electric Power Co said.

* At least 200,000 households in eight prefectures were without running water as of early on Sunday, the Health Ministry said.

* 45,777 buildings have been completely destroyed, washed away or burned down, the National Police Agency of Japan said as of 1100 GMT on Sunday.

The government has said it estimated damage from the earthquake and tsunami at 16 trillion to 25 trillion yen ($190 billion-$297 billion). The top estimate would make it the world's costliest natural disaster.

The estimate covers damage to roads, homes, factories and other infrastructure, but excludes lost economic activity from power outages and costs arising from damage to the Fukushima nuclear power plant, as well as the impact of swings in financial markets and business sentiment.

The yen spiked to a record high against the dollar after the quake, prompting the first joint intervention by the Group of Seven rich nations in 11 years to help shield Japan's export-reliant economy.

Japanese shares have shed more than 5 percent since the March 11 earthquake and tsunami, and a subsequent nuclear safety crisis, triggered the biggest two-day rout in the market since 1987.

Japan's reconstruction spending will almost certainly exceed that of the 1995 quake in Kobe, when the government needed extra budgets of more than 3 trillion yen.

The government may need to spend more than 10 trillion yen in emergency budgets for post-quake disaster relief and reconstruction, with part of them possibly covered by new taxes, Deputy Finance Minister Mitsuru Sakurai signaled on Thursday.

According to the Foreign Ministry, 134 countries and 39 international organisations have offered assistance.