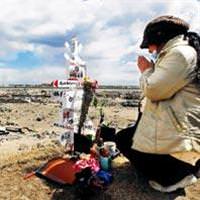 The operator of Japan's crippled nuclear power plant started paying "condolence money" on Tuesday to victims of the worst nuclear crisis since Chernobyl while it kept pouring radioactive water into the sea.

In desperation, engineers at the Fukushima Daiichi plant have turned to what are little more than home remedies to stem the flow of contaminated water. On Tuesday, they used "liquid glass" in the hope of plugging cracks in a leaking concrete pit.

"We tried pouring sawdust, newspaper and concrete mixtures into the side of the pit (leading to tunnels outside reactor No.2), but the mixture does not seem to be entering the cracks," said Hidehiko Nishiyama, deputy director-general of Japan's Nuclear and Industrial Safety Agency (NISA).

"We also still do not know how the highly contaminated water is seeping out of Reactor No.2," said Nishiyama.

There is a total of 60,000 tonnes of highly contaminated water in the plant after workers frantically poured in seawater to cool down overheated fuel rods, which experienced partial meltdown after a tsunami hit northeast Japan on March 11.

Tokyo Electric Power Co (TEPCO) was forced on Monday to start releasing 11,500 tonnes of low-level radioactive seawater after it ran out of storage capacity for more highly contaminated water. The release will continue until Friday.

Radioactive iodine of up to 4,800 times the legal limit has been recorded in the sea near the plant.

TEPCO said on Tuesday it had started paying "condolence money" to local governments to aid people evacuated from around its stricken plant or affected by the radiation crisis.

TEPCO faces a huge bill for the damage caused by its crippled reactors, but said it must first assess the extent of damage before paying actual compensation.

Chief Cabinet Secretary Yukio Edano on Tuesday instructed TEPCO to compensate people who have suffered damages from the nuclear crisis.

Shares of TEPCO plunged to a record low of 376 yen on Tuesday on uncertainty over the nuclear crisis. The shares have lost more than 80 percent of their value since the quake struck.

The quake and tsunami have left nearly 28,000 people dead or missing, thousands homeless and Japan's northeast coast a wreck.

The world's costliest natural disaster has caused power blackouts and cuts to supply chains, threatening Japan's economic growth and the operations of global firms from semiconductor makers to shipbuilders.

The crippled Daiichi plant has caused power blackouts and cuts to supply chains, threatening Japan's economic growth and the operations of global firms from semiconductor makers to shipbuilders.

The world's biggest auto maker Toyota Motor Corp will idle some U.S. factories due to supplies in Japan drying up. The company, which built nearly 1.5 million cars and trucks in North America last year, said it did not know how many of its 13 plants would be affected.

The nuclear crisis alone is likely to lead to one of the country's largest and most complex ever set of claims for civil damages, handing a huge bill to the fiscally strained government and debt-laden plant operator TEPCO.

Analysts at Bank of America Merrill Lynch estimate that claims could top $130 billion.

The "Suzuran," one of the world's largest liquid radioactive waste treatment plants, treats radioactive liquid with chemicals and stores it in a cement form. It can process 35 cubic meters of liquid waste a day and 7,000 cubic meters a year.

TEPCO said it would also build tanks to hold contaminated seawater, was towing a floating tank which will arrive next week, and was negotiating the purchase of three more.

Engineers also plan to build two giant "silt curtains" made of polyester fabric in the sea to block the spread of more contamination from the plant.

"Even though it was an inevitable step to prevent contaminated water with higher levels (of radiation) from flowing into the sea, the fact that we had to intentionally release water contaminated with radioactive substances is very regrettable and we are very sorry," said Chief Cabinet Secretary Yukio Edano.

Small levels of radiation from the plant have been detected as far away as Europe and the United States and several countries have banned milk and produce from the vicinity.