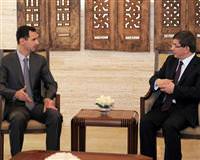 Foreign Affairs Minister Ahmet Davutoğlu is about to break another record by paying visits to three critical countries all within one day.

Do not postpone taking steps towards embarking upon the reform process and especially in lifting the state of emergency. Meeting with the opposition will bring political stability.

Explain to the public the positive aspects of your approach to Sunnis as a result of your wife also being Sunni.

Turkey is ready to provide support during the reform process.

There are a number of examples going on currently in the region, and not just limited to Egypt and Tunisia. A transition in Syria would affect the entire Middle East.