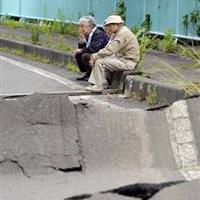 A major aftershock rocked northeast Japan on Thursday and a tsunami warning was issued for the coast devastated by last month's massive quake and tsunami that crippled a nuclear power plant.

The warning was later lifted and no tsunami was reported after the quake, which struck shortly before midnight. No damage from the tremor, measured at magnitude 7.4 by the Japan Meteorological Agency, was detected at the Fukushima Daiichi nuclear plant, operator Tokyo Electric Power Co (TEPCO) said.

Workers struggling to bring the plant under control were evacuated but returned once the tsunami warning was lifted, a TEPCO official said.

There were signs progress had been made toward stabilizing the plant, though overall the situation was still very serious, an official at U.N. nuclear watchdog the International Atomic Energy Agency (IAEA) said late on Thursday, before the aftershock struck.

Large parts of northern Japan, whose infrastructure was severely damaged by the March 11 quake and tsunami, were without electricity following the latest of many aftershocks, the biggest since last month's killer quake.

Toru Hanai, a Reuters photographer in Oshu, Iwate prefecture, near the epicenter of Thursday's aftershock, said his hotel lost power and a water pipe burst.

"Everything fell. My room is a complete mess and power is widely out in this area," he said.

"It started out as nothing much, then the building started swaying quite strongly," a Reuters witness said.

Last month's 9.0 magnitude quake triggered tsunami waves which swept in along the coast, wiping out towns. About 28,000 people were killed or are missing.

The disaster disrupted industry and affected supply chains around the world but it was not immediately clear if Thursday's aftershock would compound those problems.

At the Fukushima nuclear plant, TEPCO said it was continuing to inject nitrogen into reactor No.1 in order to prevent the risk of a hydrogen gas explosion.

An IAEA official said radiation in the region around the plant, as measured by gamma dose rates, had peaked in the early days of the crisis, and aside from a rise on March 22, had since fallen to "a level very close to background."

There were no abnormalities in radiation levels around Tohoku Electric's Onagawa nuclear power plant, where fuel rods are being cooled with just one outside power source, Japan's nuclear safety agency said.

No abnormalities were reported at those plants after Thursday's quake, which the meteorological agency said was an aftershock from March 11.

"Due to the (March 11 quake), the risk of landslides or buildings collapsing is higher than usual and there are possibilities of further damage with aftershocks," deputy chief cabinet secretary Tetsuro Fukuyama told reporters on Friday.

As engineers battle multiple crises -- some the result of efforts to try to cool reactors -- officials said it could take months to bring the reactors under control and years to clear up the toxic mess left behind.

The government has already set up a 20-km (12-mile) exclusion zone around the plant, banned fishing along much of the northeast coast and set up evacuation centers for the tens of thousands forced to leave their homes following the crisis.

Japan's neighbors have sounded increasingly alarmed over the risk of radiation from the damaged plant 240 km (150 miles) north of Tokyo, while tourists are staying away from Japan in what should be the peak season.

Trace levels of radioactive material had been detected in the air in 22 Chinese provinces but the amounts did not pose a threat to health or the environment, China's state news agency Xinhua said.

In South Korea, some schools closed on Thursday because parents were worried rain could be toxic. The few schools that closed were expected to reopen on Friday.

India said a blanket ban on food items imported from Japan was not warranted, although authorities would monitor the situation every week, a source in the Trade Ministry said.

India said on April 5 it had imposed a three-month ban on imports of food from Japan.