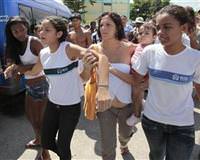 A Brazilian gunman killed 12 children at a Rio de Janeiro school and then himself, police said on Thursday, shocking the South American nation that has never seen such an incident before.

Brazilian President Dilma Rousseff wept when commenting on the incident during a speech to business leaders and requested a moment of silence for the victims.

"This type of crime is not characteristic of (our) country and therefore we are all ... united in repudiating this act of violence," Rousseff said.

The attack by the 24-year-old Welington de Oliveira was the first serial killing of its kind in Brazil. Attacks similar to the 2007 Virginia Tech massacre and the 1999 Columbine High School shooting in Colorado, were unheard of in the South American nation.

"We have to show solidarity and support for the families of the children (killed by) that psychopath, that animal," said Rio de Janeiro Governor Sergio Cabral in a press conference at the school in the Rio neighborhood of Realengo.

Police said Oliveira entered the school carrying two guns and a suicide note. Oliveira told officials he was there to deliver a speech and then opened fire on students.

He was a former student at the school. Police said they believed he was mentally unstable, citing the content of the suicide note, which asked that "(someone) stand in front of my tomb and ask God to forgive me for what I did."

Oliveira did not have a police record.

Marcos Silva, 11, who was in the school but was not harmed, said the experience was "like a horror movie."

"Everyone lay down on the ground in silence, the teacher asked us not to make noise so the killer wouldn't notice us," Silva said "I thought to myself, 'If he comes in, we're all going to die.'"

Two of the 13 wounded children fleeing to the street called a police patrol, which rushed to the school in response.

A police officer told reporters he shot Oliveira in the leg after the gunman left a classroom and was attempting to reach the third floor of the building. Oliveira fell onto the stairs and shot himself in the head.

Violence in Rio has traditionally been associated with drug gangs that control vast areas of the city's slum communities. Rio's government has in recent months made considerable advances against narco-trafficking but crime remains a problem in the beachside tourist haven.

Crime experts say contraband firearms from police and the army often end up in the hands of criminals.

Authorities have stepped up slum pacification efforts that have created a permanent police presence in poor neighborhoods in hopes of tightening security in advance of the 2014 World Cup soccer championship and the 2016 Olympic Games.