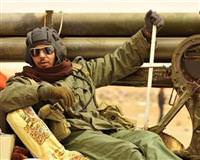 Libyan rebels said five of their fighters were killed when NATO planes mistakenly bombed a rebel tank column and a top U.S. general said they were unlikely to be able to oust Muammar Gaddafi by force.

With daily skirmishes near the contested port of Brega in eastern Libya making little impact on the front line and rebels unable to end a brutal government assault on the western city of Misrata, NATO admits its mission to protect civilians is tough.

In rebel-held eastern Libya, wounded rebels being brought to a hospital in Ajdabiyah said their trucks and tanks were hit on Thursday by a NATO air strike outside Brega, where fighting has dragged on for a week.

It was the second time in less than a week that rebels had blamed NATO for bombing their comrades by mistake after 13 were killed in an air strike not far from the same spot on Saturday.

At the same time, the rebels have accused NATO of being too slow to order air strikes they have come to depend on in their uprising to end more than four decades of Gaddafi rule.

NATO said it was investigating an attack by its aircraft on a tank column in the area along the Mediterranean coast on Thursday, saying the situation was "unclear and fluid."

Asked if a stalemate was emerging in the seven-week-old conflict, the head of U.S. Africa Command General Carter Ham said: "I would agree with that at present, on the ground."

He told a Senate hearing in Washington the United States should not arm the rebels without a better idea of who they were and when asked how the war would end, said: "I think it does not end militarily."

There was little likelihood that rebels would be able to fight their way to Tripoli and oust Gaddafi by force, Ham said.

Medical workers carried blood-soaked uniforms from hospital rooms in Ajdabiyah, gateway to the insurgent stronghold of Benghazi in the east, after wounded fighters were ferried back from Brega.

"It was a NATO air strike on us. We were near our vehicles near Brega," wounded fighter Younes Jumaa said from a stretcher at the hospital.

"NATO are liars. They are siding with Gaddafi," Salem Mislat, one of the rebels, said.

A rebel commander said it appeared to be a case of "friendly fire" and said it did not cause tension with NATO although the rebels wanted an explanation.

Rebels had brought about 20 tanks out of storage and were advancing with them along the coastal desert strip that divides Ajdabiyah and Brega when they were hit, he said.

"We would assume it was NATO by mistake, friendly fire," Abdel Fattah Younes told a news conference in Benghazi, speaking through an English translator.

Rebel spokesmen told Reuters Gaddafi forces killed five people and wounded 25 in an artillery bombardment of the isolated and besieged western city of Misrata on Wednesday.

The barrage forced the temporary closure of Misrata's port, a vital lifeline for supplies to besieged civilians, the spokesmen said, reporting fighting on a key road to the port as government forces tried to advance.

Libya's third city rose up with other towns against Gaddafi in mid-February and has been under siege for weeks after a violent crackdown put an end to most protests elsewhere in the west of the country.

A rebel spokesman told Reuters people in Misrata were crammed five families to a house in the few safe districts, to escape weeks of sniper and artillery fire.

U.N. Secretary-General Ban Ki-moon expressed concern about deteriorating conditions for civilians in Misrata and Zintan in the west, and Brega in the east.

He said the situation in Misrata was particularly grave with the city under heavy bombardment and shortages of food, water and medical supplies.

Turkish Prime Minister Tayyip Erdogan said Turkey was working on a "road map" to end the war in Libya which would include a ceasefire and the withdrawal of Gaddafi's forces from some cities. Turkey has held talks with envoys from Gaddafi's government and representatives of the opposition. A rebel spokesman said later the rebels rejected talks with Gaddafi and demanded he leave power.

The civil war has cut Libyan oil output by 80 percent, a senior government official said on Thursday, as rebels and Gaddafi's forces traded exchanged accusations over who had attacked oil fields vital to both sides.

Supply worries stemming from the attacks helped drive U.S. and Brent crude futures to their highest in 2 1/2 years on Friday.

Rebels say government attacks on three different installations in the east have halted production of the oil they desperately need to finance the uprising against Gaddafi.

The government accused Britain of damaging an oil pipeline in a strike against the Sarir oilfield which killed three guards. NATO denied the alliance carried out any air strikes in the area and said forces loyal to Gaddafi were responsible.

Shokri Ghanem, chairman of the government National Oil Corporation, told Reuters Libya's production had fallen to 250,000 to 300,000 barrels per day compared with 1.6 million before the uprising.

Oil traders said a cargo of crude, worth around $112 million was headed for China after setting sail from the rebel-held port of Marsa el-Hariga near Tobruk on Wednesday.

The trial deal was likely to clear the way for Europe to resume badly-needed purchases of Libyan oil but traders said it could be a long time before exports reach substantial levels.