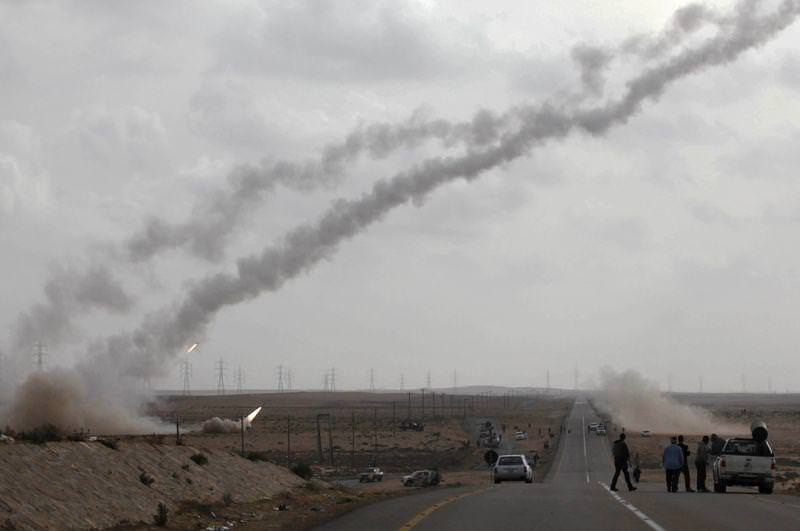 Libyan rebels said on Friday they had repulsed a government assault on the besieged western port city of Misrata and a resident said five people were killed in the fighting.

Prospects faded that Libyan leader Muammar Gaddafi would be ousted by the armed revolt and NATO leaders acknowledged the limits of their air power, which has caused rather than broken a military stalemate.

Alliance officials expressed frustration that Gaddafi's tactics of sheltering his armor in civilian areas had reduced the effects of air supremacy and apologized for a "friendly fire" incident on Thursday in which rebels said five fighters were killed.

Misrata, a lone major rebel outpost in the west of the country, has been under siege by Gaddafi's forces for weeks. On Friday, insurgents said they had pushed back an assault on the eastern flank of the coastal city after fierce street battles.

A rebel spokesman said government troops had advanced on the heavily populated Esqeer district in an effort to loosen the rebels' grip on Misrata, where families are crammed together in the few remaining safe districts.

"The attack from the east has been repelled now and the (pro-Gaddafi) forces have been pushed back," rebel spokesman Hassan al-Misrati told Reuters by telephone.

A Misrata resident called Ghassan told Reuters: "Medics at the hospital told us that five people were killed today and 10 others were wounded. We were at the hospital and we talked to medics."

Also speaking by phone, he said he could still hear clashes in the town. "We can still hear mortar fire in the distance."

NATO air strikes hit weapons depots belonging to Gaddafi's forces near the town of Zintan on Friday, a resident said.

"The depots are situated 15 km southeast of Zintan. We could see buildings on fire in the distance," the resident, called Abdulrahman, said by phone.

The only active front in the war, along the Mediterranean coast around the eastern towns of Brega and Ajdabiyah, has descended into a desultory stalemate with both sides making advances and then retreating behind secure lines.

On Friday, rebels at the western boundary of Ajdabiyah, still jittery after the friendly fire accident, fled from an artillery bombardment but there was no sign of a government advance.

The head of U.S. Africa Command, General Carter Ham, said the conflict was entering stalemate and it was unlikely the rebels would be able to fight their way into Tripoli.

Early hopes that air attacks on Gaddafi forces would tip the balance in favor of the rebels had evaporated and Western leaders were emphasizing a political solution.

NATO Secretary-General Anders Fogh Rasmussen took a similar line to Ham on Friday. "There is no military solution only. We need a political solution," he told Al Jazeera television.

NATO spokeswoman Oana Lungescu spoke of the difficulties facing alliance pilots because of Gaddafi's tactics. "The fact is they are using human shields and parking tanks next to mosques and schools so it is very hard to pinpoint any military hardware without causing civilian casualties," she said.

Political analysts predicted an extended conflict leading toward possible division of the country between east and west.

"The opposition forces are insufficient to break this deadlock and so as things stand the march on Tripoli is not going to happen," said John Marks, chairman of Britain's Cross Border Information consultancy.

"This standoff looks like it could go on pretty much forever ... for now we have a stalemate so we are looking rather more at a de facto partition."

Geoff Porter of North Africa Risk Consulting agreed. "It is increasingly unlikely that the rebels will get anywhere close to Tripoli," he said.

The confusion on the desert battlefield has caused friendly fire incidents, increasing anger among the rebels, who said they lost five men on Thursday when NATO planes bombed a column of 20 tanks brought out of storage to bolster the eastern front.

It was the second time in less than a week that rebels had blamed NATO for bombing their comrades by mistake after 13 were killed in an air strike not far from the same spot on Saturday.

Misrata, Libya's third city, rose up with other towns against Gaddafi in mid-February and has been under siege for weeks after a crackdown put an end to most protests in the west.

Rebels say people in Misrata are crammed five families to a house in the few safe districts, to escape weeks of sniper, mortar and rocket fire. There are severe shortages of food, water and medical supplies and hospitals are overflowing.

The insurgents have used containers filled with sand and stone to block roads and break supply lines to Gaddafi forces including snipers in Misrata, the rebel spokesman said.

They destroyed lower levels of a multi-storey building, stranding dozen of government snipers.