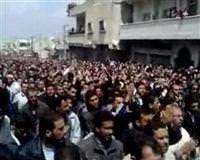 Irregular forces loyal to Syrian President Bashar al-Assad fired at a group of people guarding a mosque in Banias on Sunday, two witnesses said, after pro-democracy unrest flared in the conservative coastal city.

Once-unthinkable mass protests challenging Assad's 11-year authoritarian rule have spread across Syria despite his attempts to defuse resentment by making gestures toward reforms and reaching out to minority Kurds and conservative Sunni Muslims.

Intensifying a crackdown on popular dissent now in its fourth week, security forces fanned out in tanks overnight near the Banias oil refinery -- one of two in Syria -- near the Alawite district of Qusour, where its main hospital is located.

Gunfire could be heard across the city on Sunday. Reuters could not confirm if there were any casualties.

An official source said an armed group hiding between trees and buildings had ambushed a military unit patrol on the Latakia-Tartous highway in Banias, killing one soldier and wounding others, according to state news agency, SANA.

At least 90 people have been killed in mass demonstrations, which first erupted in March to demand the release of school children who scrawled pro-democracy graffiti on school walls in the southern city of Deraa, and later progressed to calling for greater freedoms and an end to Assad's rule.

Widespread instability in Syria would have wider repercussions because it lies at the heart of the Middle East conflict, maintaining an anti-Israel alliance with Iran and supporting the militant Hezbollah and Hamas movements.

The West has condemned Syria's use of violence but it is unlikely the strategic country, bordered by Jordan, Israel, Turkey, Lebanon and Iraq, will face the kind of foreign intervention seen in Libya.

A doctor and a university professor said a group was guarding Banias's Sunni Abu Bakr al-Siddiq mosque with sticks during morning prayers when irregulars from Syria's ruling Alawite minority, known as "shabbiha," fired at them with automatic rifles from speeding cars.

The attack followed a demonstration of some 2,000 people in Banias on Friday when protesters shouted "the people want the overthrow of the regime" -- the rallying cry of the Egyptian and Tunisian revolutions that have inspired growing protests across Syria against decades of Alawite domination.

"Four people were hit in the feet and legs. The fifth sustained the most serious injury, an AK-47 bullet that went through his left chest lateral," said the doctor, who was at the scene.

"The regime is trying to show that this is a Sunni-Alawite issue, but the Sunni people of Banias know that only a minority of thugs are cooperating with them," said the other witness.

"Banias is a city of 50,000 people. We all know each other, and for sure we would know if there were infiltrators," he said, adding Syrian state television was the only media allowed in Banias, similar to other flashpoints across the country.

Syria has blamed the unprecedented unrest in the tightly-controlled country on "armed groups" firing randomly at citizens and security forces. Earlier, SANA said funerals were held for five policemen who died in the unrest.

In the Houla area of the central province of Homs buses were also seen unloading security personnel. Assad's sacking of the Homs governor has failed to placate protesters.

Witnesses said on Saturday security forces had used live ammunition and tear gas to scatter thousands of mourners in Deraa after a mass funeral for protesters killed on Friday.

The mourners had assembled near the old Omari mosque in the old quarter of Deraa, a mostly Sunni city where resentment against minority Alawite rule smoulders. Protesters have destroyed statues of Assad's family members and set fire to a building belonging to the Baath Party, in power since 1963.

A Syrian rights group said 26 protesters were killed in Deraa on Friday and two in Homs. Syria has prevented media from reporting in Deraa and mobile phone lines appeared to be cut.

"EMERGENCY LAW STAYS ON THE SIDE"

He has blended the use of force -- activists and witnesses say his forces have fired at unarmed demonstrators, killing dozens -- with gestures such as a pledge to replace an emergency law in force for five decades with an anti-terrorism law.

Emergency law has given the state wide powers to stamp out public protests, ban opposition and justify arbitrary arrests.

SANA quoted Abboud Sarraj, head of a panel drafting the anti-terrorism legislation, as saying the body was working on ending the "state of emergency in Syria," not the emergency law.

"If the state of emergency has ended, the law stays on the side without being enforced ... and if the need arises one of these days like if there is war, or an earthquake ... there's no problem for emergency law to be present in any country."

Assad has said the protests are serving a foreign conspiracy to sow sectarian strife, similar language his father, the late President Hafez al-Assad, used when he crushed leftist and Islamist challenges to his rule in the 1980s, killing thousands.