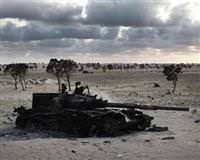 NATO aircraft destroyed Libyan tanks on the outskirts of Ajdabiyah on Sunday, helping to break a major assault by forces loyal to Muammar Gaddafi on the strategic rebel town.

NATO said it had hit 11 tanks outside Ajdabiyah, which Gaddafi's troops had earlier threatened to overrun, and 14 more on the outskirts of Misrata, a lone rebel bastion in western Libya which has been under siege for six weeks.

"NATO has to do this to help us every single day. That is the only way we are going to win this war," said 25-year-old rebel Tarek Obeidy, standing over the bodies.

The rebels, who have long complained about what they see as an ineffective NATO response to government attacks, applauded a more muscular approach over the weekend.

Earlier, the rebels seemed to be losing control of Ajdabiyah after the heaviest government assault for at least a week.

The attack, which began on Saturday, included a fierce artillery and rocket bombardment while some of Gaddafi's forces, including snipers, penetrated Ajdabiyah.

Rebels had for several hours cowered in alleyways in the town, which is gateway to their stronghold of Benghazi 150 km (90 miles) up the Mediterranean coast to the north.

The corpses of four rebels were found dumped on a roadside.

"Their throats were slit. They were all shot a few times in the chest as well. I just could not stop crying when I saw them," said rebel Muhammad Saad. "This is becoming tougher and tougher."

But by afternoon rebels looked back in control of Ajdabiyah, commanding key intersections, and the artillery and small arms fire had died down.

One rebel showed a Reuters reporter a big bloodstain in a schoolroom where he said an Algerian sniper had hidden. He shot himself in the neck when he was surrounded by insurgents, rebel Hazim Ahmed said.

Rebels accuse Gaddafi of bolstering his army with foreign mercenaries.

Ajdabiyah had been the launch point for insurgents during a week-long fight for the oil port of Brega 70 kms (45 miles) further west, and its fall would be a serious loss.

Gaddafi, making his first appearance in front of the foreign media in weeks, joined a visiting African Union delegation at his Bab al-Aziziyah compound in Tripoli on Sunday.

Wearing a brown robe and turban, he emerged from a tent in the compound where he receives guests and stood for a few moments flanked by South African President Jacob Zuma and other African leaders who are trying to mediate in the conflict.

He then climbed into a sports utility vehicle and was driven about 50 meters (yards) where he waved through the sunroof and made the "V" for victory sign to a crowd of cheering supporters.

The delegation, which also includes the leaders of Mauritania, Congo, Mali and Uganda, will meet insurgent leaders in Benghazi after talks with Gaddafi on Sunday.

It was Gaddafi's second appearance in two days after he received an ecstatic welcome from children and adults at a Tripoli school on Saturday.

The appearances, and Gaddafi's upbeat demeanor, confirmed the impression among analysts that his circle has emerged from a period of paralysis and is hunkering down for a long campaign.

Western officials have conceded their air power will not be enough to help the rag-tag rebels overthrow Gaddafi by force and they are now emphasizing a political solution.

But a rebel spokesman rejected a negotiated outcome in the conflict, the bloodiest in a series of pro-democracy revolts across the Arab world that have already dethroned the autocratic leaders of Tunisia and Egypt.

"There is no other solution than the military solution, because this dictator's language is annihilation, and people who speak this language only understand this language," spokesman Ahmad Bani told Al Jazeera television.

Gaddafi's government sought to showcase a reform-friendly face on Sunday, gathering foreign journalists in the early hours of the morning to unveil a "Libyan version" of democracy.

Details were vague and officials could not explain what Gaddafi's role would be, but it was clear he would continue to play a leading role. Insurgents say they want democracy without Gaddafi, who has ruled for 41 years.

The fight for Ajdabiyah followed pitched battles on Saturday in Misrata when rebels fought off a heavy government assault.

One insurgent there said 30 fighters were killed but another said there were eight confirmed dead and 10 unconfirmed.

Gaddafi's forces appear bent on seizing Misrata and crucially its port, which some analysts say is vital if Gaddafi is to survive because it supplies the capital Tripoli.

NATO's commander of Libyan operations said the alliance, which took over air strikes against Gaddafi from three Western powers on March 31, had destroyed "a significant percentage" of Gaddafi's armor and ammunition stockpiles east of Tripoli.

Canadian Lieutenant General Charles Bouchard said after Sunday's air attacks: "The situation in Ajdabiyah, and Misrata in particular, is desperate for those Libyans who are being brutally shelled by the (Gaddafi) regime."