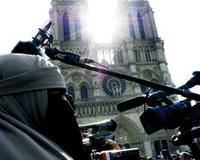 France's ban on full face veils, a first in Europe, went into force on Monday, making anyone wearing the Muslim niqab or burqa in public liable to a fine of 150 euros ($216) or lessons in French citizenship.

The ban has been criticised in France and elsewhere, but mainstream Muslim groups -- which had a six-month grace period after the law was passed to explain it to their supporters -- opted not to protest at its entry into force.

"We've already had our debate about the law and now our position is clear: we respect French law 100 percent," said a spokesman for the French Council of the Muslim Faith.

France's five-million-strong Muslim minority is Western Europe's largest, but fewer than 2,000 women are believed actually to wear a full face veil. Many still oppose the law, however, on the grounds of the precedent it sets.


President Nicolas Sarkozy's centre-right government, which pushed the law through parliament in October, rolled out a public relations campaign with posters, pamphlets and a web site to explain the ban and how it will be enforced.

Guidelines in the pamphlet forbid police from asking women to remove their burqa or full-face veil in the street. They will instead be escorted to a police station and asked to remove the veil there for identification.

Widely criticised by Muslims abroad as impinging on their religious freedom, the law has provoked a limited backlash in France where a strict separation of church and state is seen as central to maintaining a peaceful civil society.

But Sarkozy, whose opinion poll ratings are at record lows a year before he faces a tough battle for re-election, has been accused more generally of stigmatising Muslims to boost his support among far-right voters ahead of the vote.

"It's so stupid what they've done with this law, because now people will wear the (full-face veil) not out of faith but because they are looking for a confrontation," said Hager Amer, a 27-year-old Muslim woman.

Amer wore black jeans, sunglasses and a zip top but stood next to her veiled sister at a tiny gathering against the ban at Notre Dame Cathedral in central Paris to support her right to wear a "chador" head-covering.

Sitting outside a mosque in Paris' multi-ethnic 18th Arrondissement, a young man who gave his name as Mohammed scoffed at the new regulation. "All Muslims are stigmatized by this law," he said. "They don't accept Muslims here."

CIVIL DISOBEDIENCE
A Muslim property dealer is urging women to engage in "civil disobedience" by continuing to wear the veil if they so desire.

Rachid Nekkaz, the property dealer, said in a webcast he would help pay fines and was putting a property worth around two million euros up for sale to fund his campaign.

"I am calling on all free women who so wish to wear the veil in the street and engage in civil disobedience," he said.

Police said they had detained five people, two men and three women, at the small protest Nekkaz had organised in front of Notre Dame Cathedral.

The protestors were held for identity checks because their demonstration had not been authorised, not because they were wearing forbidden clothing, a policeman told Reuters.

In the southern city of Avignon, Reuters TV filmed a woman boarding a train wearing a burqa, unchallenged by police.

"It's not an act of provocation," said Kenza Drider, wearing a full-face veil on the train. "I'm only carrying out my citizens' rights, I'm not committing a crime ... If they (police) ask me for identity papers I'll show them, no problem."

"I'm not against the religion of Islam, it doesn't matter to me. But people who cover themselves up, I'm against that."
Many Muslim leaders have said they support neither the veil nor the ban. But Hassan Chalghoumi, an imam in the suburb of Drancy northeast of Paris, said he supported the law because of the veil's effect on women.

"These women are under the impression that wearing the veil is a religious obligation," Chalghoumi said on LCI television. "We have an obligation to protect them, to educate them."

On Saturday, police arrested around 60 people who turned up in Paris for a banned protest over the veil ban which had been called by a Muslim group in Britain.

One of the protesters, outspoken British Muslim activist Anjem Choudary, was considered a "serious threat to public order" and sent back to Britain, a police report showed.

The guide sent out last week to police notes that the burqa ban does not apply inside private cars, but it reminds officers that such cases can be dealt with under road safety rules.