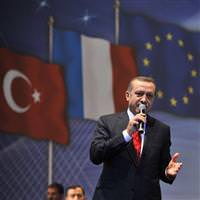 Erdoğan told the Parliamentary Assembly of the Council of Europe that Turkey was the only Muslim country that had copied the French law on secularism, or separating church and state.
"It's quite ironic to see that secularism is today under debate in Europe and is undermining certain freedoms," he said.
"Today in France, there is no respect for individual religious freedom," he said. The Strasbourg-based Council of Europe monitors human rights across the continent.
France's conservative government has banned full face veils in public and held a divisive national debate about secularism that Muslims here said portrayed them as a problematic minority rather than a group of mostly law-abiding French citizens.
At five million, the Muslim minority here is Europe's largest and makes up about 8 percent of the French population.
The national debate on secularism split even President Nicolas Sarkozy's government, with Prime Minister Francois Fillon and some other conservatives refusing to take part.
Critics said the debate sought to attract far-right voters.
When a French parliamentarian rejected his accusation, Erdoğan invited her to visit Turkey to see the situation for herself. "In Turkey, we say 'he comes from France' to describe someone who's a bit out of step," he commented.
Turkey's tiny Christian minorities have complained about bureaucratic limits on their communities and several Christian leaders have been killed in recent years.