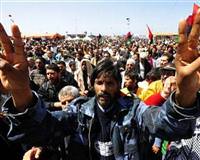 Forces loyal to Libyan leader Muammar Gaddafi bombarded the besieged rebel city of Misrata and battled their way into its center, and U.S., British and French leaders redefined the aim of their air war to regime change.

President Barack Obama acknowledged the military situation on the ground in Libya had reached stalemate three weeks into the war, but said he still expects NATO allies to force Gaddafi from power eventually.

They acknowledged their new aim of regime change went beyond protecting civilians, as allowed by a U.N. Security Council resolution, but said Libyans would never be safe under Gaddafi.

More than a hundred government rockets crashed into Misrata on Friday, a second day of heavy bombardment of the city, the lone major bastion of the rebels in the western part of Libya. Rebels said government forces had reached the city's center.

Human Rights Watch said it had evidence that Gaddafi's forces were firing cluster munitions into residential areas of Misrata. It published photographs of what it said were Spanish-produced cluster bombs, which release grenades designed to explode into fragments and kill the maximum number of people.

Mussa Ibrahim, a Libyan government spokesman, dismissed the allegations: "I challenge them to prove it."

By pledging not to end the air war until Gaddafi leaves power, the U.S., French and British leaders have raised the stakes. They have ruled out sending ground troops, but it remains to be seen whether air power alone will be enough to dislodge a leader who has held power firmly for 41 years.

"I didn't expect that in three weeks, suddenly as a consequence of an air campaign, that Gaddafi would necessarily be gone," Obama said in an interview with the Associated Press.

"You now have a stalemate on the ground militarily, but Gaddafi is still getting squeezed in all kinds of other ways. He is running out of money, he is running out of supplies. The noose is tightening and he is becoming more and more isolated.

"My expectation is that if we continue to apply that pressure and continue to protect civilians, which NATO is doing very capably, then I think over the long term Gaddafi will go and we will be successful."

A rebel spokesman in Misrata said pro-Gaddafi forces had shelled both the center and the road leading to the port, a lifeline for trapped civilians and the main entry point for international aid agencies, killing eight people on Friday.

"Today was very tough ... Gaddafi's forces entered Tripoli Street and Nakl al Theqeel road," he said by phone, referring to a main Misrata thoroughfare, scene of heavy clashes in recent weeks, and the road to the port.

"Witnesses said they saw pro-Gaddafi soldiers on foot in the city center today. Except for snipers, they usually stay in their tanks and armored vehicles," the spokesman added.

A government reconnaissance helicopter had flown over the city, he said, despite a no-fly zone mandated by the U.N. Security Council and enforced by NATO warplanes.

Hundreds are believed to have died in Misrata, under what Obama, Cameron and Sarkozy described in their article as a "medieval siege."

"Our duty and our mandate under U.N. Security Council Resolution 1973 is to protect civilians, and we are doing that. It is not to remove Gaddafi by force. But it is impossible to imagine a future for Libya with Gaddafi in power," they wrote.

"So long as Gaddafi is in power, NATO and its coalition partners must maintain their operations so that civilians remain protected and the pressure on the regime builds."

The United States led the bombing campaign in its first week, but has since taken a back seat, putting NATO in command with the British and French responsible for most strikes on Gaddafi's forces. Obama made clear Washington was not planning to resume to a more active military role.

"What we're doing is still providing jamming capacity, intelligence, refueling, so we still have a lot of planes up there. We're just not the ones who are providing strikes on the ground for the most part," he said.

But if the campaign runs on for long without toppling Gaddafi, Obama may come under pressure to commit more weaponry.

Britain and France spent this week trying to persuade other NATO allies to contribute more fire power. NATO ministers met for a second day on Friday in Berlin, and divisions were clear.

Late on Friday, an aid ship brought nearly 1,200 Misrata evacuees to the eastern Libyan city of Benghazi, just a fraction of those stranded in the besieged city and desperate to escape, an official of the International Organization for Migration, who was on board the Greek ship, said.

There were likely to be at least 8,000 to 10,000 migrants who still needed to be evacuated from the city, Jeremy Haslam, an aid coordinator with the International Organization for Migration (IOM) who was on board the ship, said.

Bombardment made it impossible to get into many areas of Misrata and pressed the aid ship to leave as swiftly as it could, he said. That meant making hard choices when deciding who to bring on board.

"We threw out the textbook, basically. We couldn't get to the most vulnerable, those who need to get out fastest, because it was too dangerous," Haslam said.

Secretary of State Hillary Clinton said the NATO allies were searching for ways to provide funds to the rebels, including helping them to sell oil from areas they control.

"The opposition needs a lot of assistance, on the organizational side, on the humanitarian side, and on the military side," she said.