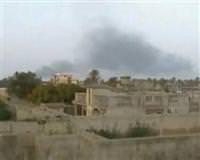 Forces loyal to Libyan leader Muammar Gaddafi kept up an offensive on the rebels' eastern frontline outpost of Ajdabiyah, while the West again ruled out sending ground troops to help the rebel cause.

One witness said he saw around a dozen rockets land near the western entrance to Ajdabiyah, which rebels wanted to use as a staging post to retake the oil port of Brega. Many fled on Sunday as loud explosions boomed across the town.

"There are still some guys out there at the western gate but the situation isn't very good," said Wassim el-Agouri, a 25-year-old rebel volunteer waiting at Ajdabiyah's eastern gate.

"We want weapons, modern weapons," said rebel Ayman Aswey, 21. "If we had those, we could advance against them."

Sunday marked a month since the U.N. Security Council passed a resolution authorising force to protect civilians in Libya, leading to an international air campaign.

But despite NATO air strikes against Gaddafi's armor, rebels have been unable to hold gains in weeks of back-and-forth fighting over the coastal towns in eastern Libya.

With NATO troops bogged down in Afghanistan, Western countries have ruled out sending ground troops, a position reinforced by the British prime minister on Sunday.

"What we've said is there is no question of invasion or an occupation -- this is not about Britain putting boots on the ground," David Cameron told Sky News in an interview.

He said outside powers would help in every other way to stop Gaddafi "unleashing this hell on people in Misrata" and other towns up and down the Libyan coast, including providing "non-lethal equipment" to the rebels.

European Council President Herman van Rompuy said he viewed the Libyan rebel council as "a valuable discussion partner ... that embodies the Libyan people's aspirations," a political vote of confidence for a force that has struggled militarily.

Ajdabiyah's streets were almost deserted by mid-afternoon and rebels barricaded the roads with concrete blocks, tree branches and anything else they could find.

Rebel pick-ups patrolled the streets and men took up positions across the town with machineguns and rocket-propelled grenade launchers. Others returned to positions at the western gate with their weapons pointed west and south into the desert.

"We are ready for a street war. We are prepared. We have got dynamite and we've got grenades," said rebel fighter Emtar el-Farjany, who was holding a stick of dynamite.

Some rebels on Saturday made it into the outskirts of Brega, 50 miles to the west, but many others retreated to Ajdabiyah after six were killed by rockets fired by Gaddafi loyalists on the exposed coastal road joining the two towns.

By Sunday, scores of volunteer fighters and civilian cars carrying men, women and children streamed east from Ajdabiyah up the coast road toward Benghazi, where the popular revolt against Gaddafi's 41-year rule began on February 17.

In western Libya, the rebel-held city of Misrata has been under government siege for seven weeks, leading to a growing humanitarian crisis. Hundreds of civilians are believed to have been killed in the fighting and shelling of the city.

The United States, France and Britain said last week they would not stop bombing Gaddafi's forces until he left power, although when or if that would happen was unclear.

The rebels pushed hundreds of kilometres toward the capital Tripoli in late March after foreign warplanes began bombing Gaddafi's positions to protect civilians, but proved unable to hold territory and were pushed back as far as Ajdabiyah.

"From a military point of view, one can currently see there is a stalemate," the head of Germany's intelligence service, Ernst Uhrlau, told the Hamburger Abendblatt newspaper.

"One cannot predict at the moment how much longer Gaddafi can hold onto power. The area around Tripoli is much stronger in terms of the population and the tribes than the east," he said.

Earlier on Sunday a sandstorm obscured the flat expanse of desert stretching west from Ajdabiyah to Brega. Rebel Ahmed al-Zuwaihi blamed the weather for a lack of NATO air strikes.

"The weather is no good today. NATO hasn't hit anything," he said. "It's a big opportunity for Gaddafi and he's taking advantage of it. He might enter Ajdabiyah today. Today the planes are not going to hit anything."

NATO warplanes instead bombed the area of Al-Hira, 50 km (30 miles) southwest of the capital Tripoli and also hit the city of Sirte, Libyan state television said. Bursts of anti-aircraft fire were heard in Tripoli on Sunday evening.

"Snipers are firing in all directions," he said. "For three days, it was very tough. Gaddafi troops were launching powerful attacks. They have been firing artillery, mortars."

Food was running short and long queues formed outside bakeries. Some streets were fast becoming unrecognizable.

He said Libya was ready to comply with U.N. resolutions to implement a ceasefire and allow the delivery of humanitarian aid, according to the Jana state news agency.