"Operation to go on in Libya" 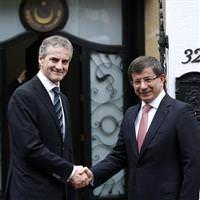 Foreign Affairs Minister Ahmet Davutoğlu held a meeting with his Norwegian counterpart in which he states a consensus was reached on collaboration regarding the conflict in the region and emphasizes the necessity for NATO operations to continue in order to prevent Libyan civilians from harm.

Norway, known for being an international mediator and Turkey, who as of late has undertaken an increasing role in this arena, will collaborate to initiate a political transition in Libya.
During a joint press conference with his Norwegian counterpart Jonas Gahr Store, Davutoğlu, stated that in regards to the ongoing efforts in the Middle East, he perceives Norway's "experience in mediation to be a very significant value." Norwegian Minister Store noted that they have begun working together in order to initiate a political transition in Libya as soon as possible. Speaking at a joint press conference, Davutoğlu expressed that the priority in Libya was improving the humanitarian situation, preventing attacks on civilians and establishing a permanent solution. Davutoğlu states, "The operation must go on. The attacks, which result in the loss of civilian lives and especially those directed at Misrata must be stopped. NATO is doing all that they can and they must."

A POLITICAL SOLUTION MUST BE REACHED
Mentioning that he believes that intervention is necessary, Store emphasized that what is important is reaching a political solution for Libya. Store stated that the military aspect is complicated, however establishing a political process will necessitate a long-term strategy.
Upon a question regarding criticism directed at NATO, Store stated, "The worst scenario would have been doing nothing." Expressing that they have reached a decision to work together on the recent developments in the Middle East, the Palestinian issue, Afghanistan and the Balkans, Davutoğlu states, "We will work together in order to ensure that peace prevails."