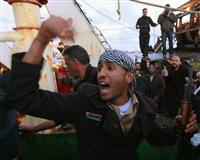 NATO may have to intensify attacks on government forces to break the military stalemate in Libya, while the United Nations pushes for a humanitarian presence to help civilians trapped in the conflict.

Both approaches, aimed at carrying out a U.N. Security Council mandate to protect Libyan civilians from attack by President Muammar Gaddafi's troops, will focus on the western city of Misrata, the only west Libyan city still in rebel hands.

Hundreds of people are thought to have been killed in the seven-week siege of the port city, where thousands of foreign migrant workers are stranded. A rebel spokesman said at least 31 people were killed in Misrata on Sunday and Monday by government shellfire and snipers.

Two months after the Libyan rebellion broke out in earnest, inspired by uprisings against autocratic rulers elsewhere in the Arab world, the insurgents control only the east of the country from their Benghazi stronghold, and part of Misrata.

NATO bombing has damaged Gaddafi's armour but not enough to break the stalemate, and the alliance may have no choice but to use naval gunfire or helicopters, analysts said -- the latter vulnerable to ground fire by Gaddafi's troops.

"There's more risks using helicopters as they are easier to shoot down, and it's a serious problem if you have casualties or people captured," said Daniel Keohane of the EU Institute for Security Studies think tank.

The U.S., British and French leaders said last week they would not stop military action until Gaddafi quit.

"They've boxed themselves in by describing victory as Gaddafi leaving," said Keohane. "I don't think there's any way they can walk away now. There's a political imperative to carry on."

While NATO looked for a more effective way of attacking Gaddafi's forces despite limited resources, UN humanitarian chief Valerie Amos said on Monday in Benghazi she was extremely worried about the plight of civilians in Misrata.

"I very much hope the security situation will allow us to get into Misrata," she said. "No one has any sense of the depth and scale of what is happening there."
Before the rebellion, Misrata had a population of 300,000.

The European Union outlined a tentative plan on Monday to send European troops to Misrata to protect aid deliveries if requested by the United Nations, EU officials said.

U.N. Secretary-General Ban Ki-moon, in Budapest, said Gaddafi's government had agreed to a humanitarian presence in the capital Tripoli. His spokesman Farhan Haq said this included an agreement on the entry of international humanitarian staff and equipment through the Tunisian border.

Details were scarce, and so far Libya has not agreed to a ceasefire to allow aid providers an opportunity to work.

Previously, NATO leaders had ruled out sending ground troops into Libya, but EU foreign policy chief Catherine Ashton said on Monday "The 27 (EU members) have now adopted unanimously the concept of the operations" -- if the UN requested it.

Any EU mission could involve hundreds of military personnel securing transport of supplies directly to Libya, in particular Misrata, and helping to supply food and shelter to refugee camps on the Tunisian and Egyptian borders.

EU troops would not have a combat role, except to protect the humanitarian mission, but analysts say the arrival of the first Western troops since the Libyan crisis erupted would be significant.

A chartered ship evacuated nearly 1,000 foreign workers and wounded Libyans from Misrata on Monday, the second evacuation ship in the past few days. Rebels said they had gained ground in fighting in the Tripoli Street area despite government shelling.

"It is clear Gaddafi wants to wipe out Misrata. NATO's inaction is helping him carry out this plan. Are they waiting for a massacre to happen to realize that they need to change tactics?" rebel spokesman Abdelsalam told Reuters by telephone.

The Libyan government denies allegations that it is violating its people's human rights and says it is fighting gangs of al Qaeda militants.

Pro-Gaddafi forces have also kept up an offensive on the rebels' eastern frontline outpost of Ajdabiyah, from where the rebels hope to retake the oil port of Brega, 80 km to the west.