Royal Wedding to be streamed live on internet 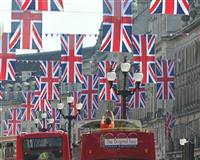 The wedding of Britain's Prince William to university sweetheart Kate Middleton will be streamed live on the internet via an official royal channel -- the first time a British royal wedding will be covered in this way.

April 29's event, expected to be watched by up to two billion people across the globe, will be available on www.youtube.com/theroyalchannel and accompanied by a live multi-media blog assembled by royal officials.

St James's Palace, whose officials represent Princes William and Harry, said the feed would be taken from British public broadcaster, the BBC, without a broadcaster's commentary.

"Staff at Clarence House and St James's Palace will provide a live commentary with historical information, interesting links, additional photographs and video footage as well as an integrated Twitter feed," the palace said in a statement.

Officials said it was the first time a live blog would run alongside a live stream on video-sharing website YouTube for any occasion.

In addition, an official video "Wedding Book" on YouTube invites anyone to submit their own video of congratulations to the couple.

The royal family, previously seen as out of touch with modern Britain, is making extensive use of the internet and a variety of social media applications in the run-up to the big day.

Photographs related to the wedding will be released via photo-sharing site Flikr, and announcements on the day itself will be published on the official wedding site www.officialroyalwedding2011.org.

A @ClarenceHouse account on short messaging service Twitter will provide live updates on the day, and will be integrated into the live blog.

Alongside the video message option, anyone wanting to send the couple a message of congratulations on Twitter can do so using the hashtag #rw2011, officials said.

The royal family even have a page on social networking site Facebook (www.facebook.com/TheBritishMonarchy).