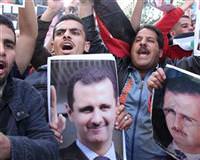 Syria's government passed a draft law on Tuesday to lift 48 years of emergency rule, a concession to unprecedented demands for greater freedom in the tightly-controlled Arab country.

But the move was coupled with new legislation requiring Syrians to obtain a government permit to demonstrate. Defiant protests continued in any case, and three more protesters were shot dead in the tinderbox city of Homs, rights activists said.

Demonstrators took to the streets in the city of Banias after the announcement of an end to the state of emergency and opposition leaders said they would not relent until their other demands, including the release of political prisoners, freedom of speech, and a multi-party system, were also met.

The state news agency SANA said the cabinet had ratified draft legislation, which must still be signed by President Bashar al-Assad, "to end the state of emergency in Syria."

Emergency rule, in place since the Baath Party seized power in a 1963 coup, gave security organs almost blanket power to stifle dissent through a ban on gatherings of over five people, arbitrary arrest and closed trials, opposition figures say.

Inspired by uprisings sweeping the Arab world, thousands of people have rallied across Syria demanding reforms, posing the most serious, sustained challenge to Assad's rule. Rights groups say more than 200 people have been killed in the unrest.

Syria sits on the fault lines of many Middle Eastern conflicts and any regime change would ripple across the Arab world and Iran, its ally. Syria, still formally at war with Israel, also has borders with Lebanon, Turkey, Iraq and Jordan.

The Syrian cabinet, which has little power and rubber-stamps Assad's orders, also passed a law to abolish a special security court which human rights lawyers says violates the rule of law and the right to fair trial.

But it also passed legislation to "regulate the right of peaceful protest." Permission from the Interior Ministry will be needed to demonstrate in Syria, the news agency said.

One activist dismissed the cabinet decision, saying Assad himself could have repealed emergency law immediately. "The government doesn't need to issue anything ... It's in the hands of the president to lift it," Ammar Qurabi said.

"This (announcement) is all just talk. The protests won't stop until all the demands are met or the regime is gone," leading opposition figure Haitham Maleh, an 80-year-old former judge, told Reuters.

The United States is unsure that Syria's draft law to lift emergency rule will actually be less restrictive in light of the new law requiring people to get permits before demonstrating, a State Department spokesman Mark Toner said on Tuesday.

In light of some comments from Syria's interior minister, "this new legislation may prove as restrictive as the emergency law it replaced," he said, adding that the Syrian government "needs to urgently implement broader reforms."

Rights activists said at least three more protesters were killed in the latest shooting early on Tuesday. SANA reported that four people, two policemen and two gunmen, were killed in clashes in the city.

The government says Syria is the target of a conspiracy and authorities blame the violence on armed gangs and infiltrators supplied with weapons from Lebanon and Iraq, an accusation that opposition groups say is unfounded.

The protests, the most serious since an armed revolt by Islamists in 1982, comprise all shades of society including ordinary Syrians, secularists, leftists, tribal figures, Islamists and students.

Assad, who has ruled for 11 years since assuming power on the death of his father Hafez al-Assad, has responded with a combination of limited concessions and fierce crackdown.

In a sign that authorities would offer no ground to protesters, the Interior Ministry on Monday night described the unrest as an insurrection by "armed groups belonging to Salafist organisations" trying to terrorise the population.

Salafism is a strict form of Sunni Islam that many Arab governments equate with militant groups like al Qaeda. Assad and most of his inner circle are from Syria's minority Alawite community, who adhere to an offshoot of Shi'ite Islam.

"Not Salafist, not Muslim Brotherhood. We are freedom seekers!" hundreds of people chanted in Tuesday's demonstration in Banias, in response to the Interior Ministry statement.

Dozens of medical students also demonstrated at Damascus University's college of medicine earlier on Tuesday chanting "Stop the massacres. Syria is free. Syria is dignity," two rights campaigners in contact with the students said. They said security forces beat the students to break up the protest.

In Deraa, where the protests first broke out and which has seen most bloodshed, residents said on Tuesday that security forces who stayed off the streets in recent days were being reinforced, possibly preparing for a move to reassert full control over the restive Sunni Muslim town.