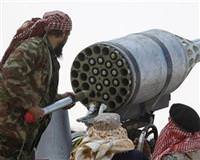 The United Nations appealed on Tuesday for a ceasefire in the Libyan city of Misrata, saying at least 20 children had been killed in attacks by besieging government forces on rebel-held parts of the city.

Libya's third city, where hundreds are believed to have been killed by shelling and sniper fire by Muammar Gaddafi's forces, is the main focus of efforts to protect civilians caught up in the Libyan leader's bid to put down an armed rebellion.

At the same time Western powers are looking for ways to support the rebels' efforts to topple Gaddafi, though NATO said there were limits to what air power could do to end the city's siege.

Britain said it would send military officers to advise the rebels on organization and communications, but not to train or arm fighters. France said the West had underestimated Gaddafi's ability to adapt his tactics in response to the NATO operation.

Italy said the international Libya Contact Group was seeking ways to allow the rebels to sell oil produced in the rebel-held east despite a U.N. embargo on Libyan oil sales.

Nine weeks after the rebellion broke out, inspired by other uprisings against autocratic Arab rulers, the NATO-led air campaign to keep Gaddafi's forces out of the air and prevent attacks on civilians has failed to halt the bombardment of Misrata, a city of 300,000 people.

"Fifty days into the fighting in Misrata, the full picture of the toll on children is emerging -- far worse than we had feared and certain to get worse unless there is a ceasefire," said Marixie Mercado of the U.N. children's fund UNICEF.

"We have at least 20 verified child deaths and many more injuries due to shrapnel from mortars and tanks and bullet wounds," she told a news briefing in Geneva.

Aid groups say food, medicines and other basic items are in short supply in the city, and tens of thousands of casualties and foreign workers are waiting at the port to be evacuated.

Many NATO members refuse to go beyond enforcing a U.N.-mandated no-fly zone to attack Gaddafi's forces, despite the urging of the United States, France and Britain.

Some of those who allowed a U.N. Security Council resolution on Libya to pass say that it is being misused to give the rebels military aid -- though fighting appears to have stalemated on a front line just west of Ajdabiyah in eastern Libya.

"The U.N. Security Council never aimed to topple the Libyan regime," he said in Belgrade. "All those who are currently using the U.N. resolution for that aim are violating the U.N. mandate. It is crucial to establish a ceasefire."

The European Union outlined a tentative plan on Monday to do just that, with a non-combat mandate, to protect aid deliveries to Misrata and elsewhere if requested by the United Nations.

Any EU mission could involve military personnel securing the transport of supplies to Libya, in particular Misrata.

The U.N. World Food Program said it had, with Libyan consent, sent eight trucks from Tunisia with 240 tons of food -- enough for 50,000 people for 30 days -- to towns in the west including Zawiyah, Zintan and Nalut that are mostly under Gaddafi's control after uprisings were crushed.

A combination of fighting and U.N. sanctions have caused gasoline shortages in Tripoli and other government-controlled towns in the west.

But state oil official Bashir Guiloushi, who chairs Brega Oil Company, told state television that "we are working to ensure the arrival of successive cargoes of gasoline," without specifying where it was coming from.

He said the oil refinery at Zawiyah west of Tripoli, where production stopped for several weeks while rebels controlled the city, was now working at full capacity again.

For now, Misrata's lifeline is its port, where humanitarian supply ships have been docking and ferries have been evacuating some of the wounded as well as trapped foreign workers, although many thousands still await a passage to safety.

"There is no electricity. The town is functioning on generators ... the reserves of fuel are being used up," Amnesty International researcher Donatella Rovera told Reuters by telephone from the city. "The supply of water has now been cut off for weeks so, again, what is being used is reserves."

Government shellfire continued on Tuesday, Rovera said, and a rebel spokesman said at least 31 people had been killed there on Sunday and Monday by government shelling and snipers.

Doctors from the Arab Medical Union working in Misrata told the World Health Organization that the 120-bed hospital there was "overwhelmed."

They said around 30 patients with multiple injuries and requiring surgery were being admitted every day.

Libyan officials say they are fighting armed militias with ties to al Qaeda bent on destroying the country, and deny that government troops are shelling Misrata.

The rebels who control the eastern territory around Benghazi had hoped to sell oil produced there to finance the rebellion, but the U.N. sanctions designed to cut off Gaddafi's revenues have prevented them selling more than a trickle.

Italian Foreign Minister Franco Frattini said he hoped a meeting in early May of the Libya Contact Group -- European and Middle Eastern countries, the United Nations, the African Union and the Arab League -- would agree a way to let the rebels sell oil on world markets.