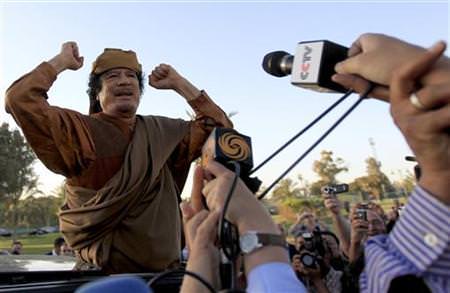 Muammar Gaddafi's government is circumventing international sanctions to import gasoline to western Libya by using intermediaries who transfer the fuel between ships in Tunisia.

One intermediary company, Hong Kong-based Champlink, previously unknown to the oil trading community, has sought a transaction for fuel delivery into Libya, and European oil traders said they had been approached by other such firms.

"Gaddafi's people are looking to buy gasoline, via (Tunisian port) La Skhira... and Champlink. They ship-to-ship at La Skhira," said a source with direct knowledge of the situation.

In a fax, obtained by Reuters, Champlink approached trading firms with an "urgent" request stating, "we have been appointed as procurers for end user in Libya and looking for ready shipments for gasoline."

The fax proposed either shipping directly to the western Libyan port of Zawiyah, near the capital Tripoli, or to Tunisia's La Skhira, to be transferred onto a waiting tanker.

The fax, dated April 1, requests fortnightly 25,000-tonne shipments of gasoline for the next six months, highlighting the possibility of "tanker-to-tanker transfer."

It said neither the cargo nor the end user company is on any international sanctions list.

Champlink's Bhagoo Hathey, whose signature is on the fax, confirmed in an email to Reuters last week that a shipment of 40,000 tonnes arrived at La Skhira earlier this month, but did not name the supplier or say whether or not the gasoline had been shipped on to Libya.

In a later email he denied receiving any shipment at La Skhira.

In a separate document seen by Reuters, a company called Afrimar Tunisia, which is part of Afrimar Group North Africa, sent a request on April 12 to shippers for a vessel with capacity to carry 40,000 tonnes of gasoline loading from Turkey to La Skhira for ship-to-ship transfer there.

The firm -- whose website www.afrimar.com shows it has a branch in Tripoli -- said it had two additional cargoes available from the end of April at two week intervals for which it needed to charter vessels.

Afrimar did not respond to an email enquiry and was not available for comment on Wednesday.

It is not known whether or not any shipments handled by Afrimar have reached Libya.

The United States, the United Nations and European Union imposed sanctions on the Libyan government and selected Libyan companies, including NOC, in late February and in March. It is not illegal for Libya to export or import oil or gasoline, but it is illegal to trade with NOC.

"We assume that somehow the NOC is involved at some level," a Security Council diplomat told Reuters.

He added that the council's Libya sanctions committee, which oversees compliance with the U.N. measures adopted on February 26 and March 17, has not been informed of the issue yet.

The sanctions on Libyan firms have left both government and rebel forces seeking fuel supplies, although shipments have begun to resume to rebel-held territory mainly in the east of the country.

While Gaddafi's government needs fuel to run its military assaults on rebels in the east and in the besieged, rebel-held western port of Misrata, as important for the stability of his rule is avoiding discontent in the capital by ensuring supplies of basic goods, including fuel for cars and public transport.

A month ago, shortages led to increasingly vocal complaints about the government. Residents reported long lines and even gunfights at petrol stations as people tried to stock up. The supply situation has markedly improved in recent weeks.

Oil trading and shipping sources said at least 120,000 tonnes of gasoline had arrived so far this month at La Skhira for ship-to-ship transfers, a figure that amounts to nearly half of Tunisia's annual imports.

While La Skhira is used to trans-ship fuel to other countries in addition to Tunisia's domestic fuel needs, the volumes arriving there are unprecedented.

It was unclear which, if any, of the receiving vessels at La Skhira had then sailed for Libya.

OPEC member Libya is one of Africa's top crude oil producers but, even in peacetime, relies on gasoline imports because of inadequate refining capacity.

Libyan state television said on Tuesday Tripoli was working to ensure the arrival of several gasoline cargoes to meet demand, and that it had restored its refinery in Zawiyah to normal production capacity.

The sources said they know of three vessels transhipping gasoline in the port of La Skhira this month, and one of these cargoes had been picked up by a Libya-flagged vessel.

It was not clear whether Champlink or Afrimar was involved in any of these transactions.

A manager at the Tunisian importing body STIR, who asked not to be named, said he did not know of Champlink's existence, adding: "All imports to Tunisia are done by STIR and if there are other things going on, I am not aware of that."

A second source at STIR said Tunisia had received no gasoline imports into La Skhira for its own domestic use in April, which could imply the shipments were onward bound for Libya.

Oil traders say they have been approached by several previously unheard of companies seeking to buy fuel to delivery into Libya. Several said they refused the offer because of the risk of breaching international sanctions.

"I had one enquiry for 10,000 tonnes from a company I had never heard of," said one trader, adding, "It's a difficult time, because you need to triple check all counterparties and make sure they are not breaching sanctions."

Although the United Nations named Libya's NOC and several subsidiaries on its list of entities whose assets were frozen, traders said they believed fuel deliveries could still be possible since it would take time to update sanctions lists to cover any newly emerging Libyan companies.

"My guess is that this can't continue. Refined products is one area of vulnerability for Gaddafi, but if the governments (imposing sanctions) have to play catch up on sanctions, then there is a window," said Saket Vemprala of research group Business Monitor International.

"From a military point of view, if the West can starve the government of fuels it will be important."

Oil traders have previously found ways of getting around international sanctions including those against Iran, Iraq and South Africa. Lawyers, though, say Libyan sanctions are robust by historical standards.

"Reloading products has always been big business. You re-do the bills of lading....this is nothing new as far as the industry is concerned," said a veteran oil products trader.