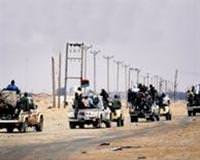 "If the bombing stopped, Obeidi said, after six months there could be an election supervised by the U.N.," BBC radio reported Wednesday.

"The foreign minister said the election could cover any issue raised by all Libyans, anything could go on the table, including, he implied, the future of Gaddafi as leader."

BBC television later broadcast one of the minister's comments made during the interview: "It will cover whatever issue is raised by all Libyans."

Obeidi said the Libyan government was "serious about a properly verifiable ceasefire supervised by foreign observers," the BBC reported.

"We need actions not words from Gaddafi's regime. We have had several offers of ceasefires before from this regime -- at the same time as his forces continue flagrantly to shell cities like Misrata and attack the Libyan people," a Foreign Office spokesman said.

"Gaddafi needs to respect the U.N. Security Council resolutions and he must pull his forces back from the cities he is besieging ... Then we can move forward to a real political transition in Libya," he said.

"It is clear that Gaddafi cannot be part of Libya's political future after the way he has behaved toward his own people," the spokesman added.

"He (Obeidi) said that would only prolong the fighting," the BBC said.

London said Tuesday it would send about a dozen officers to help insurgents improve their organization and communications, but would not arm the rebels or train them to fight.

A NATO-led coalition is enforcing a U.N.-mandated no-fly zone in Libya, which authorizes "all necessary measures" to protect civilians from attack by Gaddafi's forces.

It is also policing an arms embargo and has targeted Gaddafi's military infrastructure.