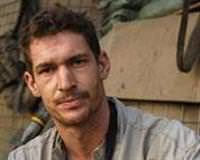 Fighting in Libya's besieged rebel city of Misrata killed at least 10 civilians including an Oscar-nominated British filmmaker, and NATO urged non-combatants to avoid troops so it could step up air strikes.

Among the dead were British photojournalist Tim Hetherington, co-director of Oscar-nominated war documentary "Restrepo," and American photographer Chris Hondros, killed when a group they were in came under mortar fire.

Rebels said they were battling for control of a major road in Misrata, a port of 300,000 people and the insurgents' last bastion in the west of the country, where civil war ignited in February over demands for an end to Gaddafi's 41-year rule.

Around 120 people were wounded, including the wife of the Ukrainian doctor who lost both of her legs, according to Khalid Abufalgha, a doctor on the Misrata medical committee that tracks civilian casualties.

Abufalgha said a total of 365 people have been killed, including at least 85 civilians, and 4,000 people wounded in the Mediterranean city since it came under government siege about seven weeks ago. Civilians say they live in constant fear of government snipers.

"Mohammed and his friends were in our garage. They had gone outside to play when he had to pause to put his shoe on. In that instant the bullet hit his head," said Zeinab, mother of a 10-year-old boy who lay in bed with a bullet wound.

Rebels complained that there were too few NATO air strikes.

"NATO has been inefficient in Misrata. NATO has completely failed to change things on the ground," rebel spokesman Abdelsalam said.

Libyan state television said early on Thursday that NATO forces had struck the Khallat al-Farjan area of the capital Tripoli, killing seven people and wounding 18 others. The report could not immediately be independently verified.

Rebel spokesman Abdulrahman, reached by telephone from the western town of Zintan, said clashes were also taking place in Nalut, near the Western border with Tunisia.

"Clashes are currently occurring in Nalut and have been going on since Monday. The Gaddafi forces are using Grad missiles and mortar rounds to attack Nalut. It's not an even battle. The rebels are not well-armed."

Aid groups say the humanitarian situation in Misrata is turning grave due to a lack of food and medical supplies.

Forces loyal to Gaddafi have been bombarding Misrata heavily over the last week. The government denies it is targeting civilians in the city.

There are long queues for petrol, and electricity has been cut so residents depend on generators. Thousands of stranded foreign migrant workers are awaiting rescue in the port area.

France said it would send up to 10 military advisers to Libya, following on Britain's plan to dispatch up to a dozen officers to help rebels improve organization and communications. Neither country plans to arm or train the insurgents to fight.

"We are indeed going to intensify the attacks and respond to this request from the national transition council," an official in the president's office said, quoting Sarkozy as telling Abdel Jalil: "We will help you."

He did not say how NATO-led forces planned to overcome the stalemate on the ground after the United States and several European allies declined last week to join ground strikes.

Abdel Jalil told reporters he had invited Sarkozy to pay a visit to the eastern rebel powerbase city of Benghazi to underline French support for ending Gaddafi's autocratic tenure and "boost the morale of the revolution."

French officials did not say whether Sarkozy had accepted.

Evidence surfaced on Wednesday that Gaddafi's government is dodging U.N. sanctions to import gasoline to western Libya using intermediaries who transfer the fuel between ships in Tunisia, a source with direct knowledge of the situation told Reuters.