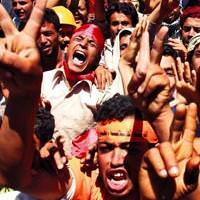 Scores of pro-democracy protesters killed by security forces will be buried across Syria in funerals expected to attract large crowds on Saturday and fuel mounting defiance against authoritarian rule.

A group of activists coordinating the demonstrations said regular forces and gunmen loyal to President Bashar al-Assad shot dead at least 88 civilians on Friday. Rights groups had earlier put the death toll at a minimum of 70.

The Local Coordination Committees activist group sent Reuters a list with names of 88 people classified by region. The group said they were killed in areas stretching from the port city of Latakia to Homs, Hama, Damascus and the southern village of Izra'a.

It was by far the bloodiest day yet in a month of demonstrations demanding political freedoms and an end to corruption in the country of 20 million people.

"The funerals will turn into vehement protests, like past funerals," a Syrian human rights campaigner said.

"When you have security services who are thugs it is difficult to think that they will not shoot at the crowds. Another cycle of funerals and demonstrations is likely to follow," the rights campaigner said from the Syrian capital.

"This outrageous use of violence to quell protests must come to an end now," Obama said in a statement. "Instead of listening to their own people, President Assad is blaming outsiders while seeking Iranian assistance in repressing Syria's citizens...."

"Syrian authorities must give up the use of violence against their citizens. We again call on them to commit without delay to an inclusive political dialogue and to achieve the reforms legitimately demanded by the Syrian people."

Those killed were among tens of thousands of people who have taken to the streets of cities and rural areas across Syria calling for the overthrow of the regime, demands which have hardened over recent weeks.

Friday's protests went ahead despite Assad's decision this week to lift the country's hated emergency law, in place since his Baath Party seized power 48 years ago.

A statement by the Local Coordination Committees said the end of emergency law was futile without the release of thousands of political prisoners -- most held without trial -- and the dismantling of the security apparatus.

In their first joint statement since the protests erupted last month, the activists said the abolition of the Baath Party's monopoly on power and the establishment of a democratic political system was central to ending repression in Syria.

Aided by his family and a pervasive security apparatus, Assad, 45, has absolute power, having ignored demands to transform the anachronistic autocratic system he inherited when he succeeded his late father, Preident Hafez al-Assad, in 2000.

Friday's violence brings the death toll to about 300, according to rights activists, since the unrest which broke out on March 18 in the southern city of Deraa.

Protests swept the country on Friday, from the Mediterranean city of Banias to the eastern cities of Deir al-Zor and Qamishli. In Damascus, security forces fired teargas to disperse 2,000 protesters in the district of Midan.

Syrian television said eight people were killed and 28 wounded, including army personnel, in attacks by armed groups in Izra'a. It said an armed group had attacked a military base in the Damascus suburb of Muadhamiya.