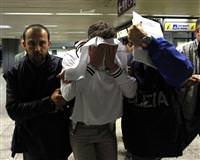 A man with a knife tried to hijack an Alitalia flight from Paris to Rome Sunday night, demanding it be flown to Libya, but was quickly overpowered and arrested when the plane landed, officials and witnesses said.

Witnesses said the man put a small knife to the throat of a female flight attendant and held her for a few minutes.

"The man grabbed the stewardess from behind her back and pointed the knife. She was in difficulty and tried to turn around," a passenger named Sofia told reporters.

Stefanie, a French woman who lives in Italy, said the man laughed when the stewardess asked him to go the front of the plane with her.

"He held her for just a few minutes and then the other flight attendants intervened and passengers helped hold the man to the floor," she said.

Italian media said police had identified the man as a 48-year-old citizen of Kazakhstan who worked in Paris.

A statement from Alitalia airlines said the man had "assaulted a flight attendant and asked that the plane be taken to Tripoli."

Other attendants on flight AZ329 then overpowered the man, who was "clearly agitated" and the captain radioed police, who arrested the man when the plane landed, the statement said.

The flight attendant was taken to a first aid station at Rome airport for treatment of minor injuries.