Turkey has five warnings for Assad 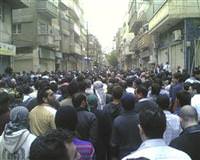 While Turkey has already made a number of suggestion to Syrian State Leader Bashar Assad, when no steps were taken towards the reform process, Ankara issued a five-item warning to Damascus: Don’t use force, make reforms and do not let events escalate.

Ankara has finally established some distance between Syrian State Leader Bashar el Assad. When recommendation after recommendation reaped no rewards, Ankara announced their expectations definitively for the entire world. When Assad continued to remain slow to take action on the reform process while also using violence against citizens, Ankara announced their reactions and expectations to the public.
Stating that Ankara is more concerned for the Syrian public then Assad, this time the capital has issued a warning. Prime Minister Tayyip Erdoğan, Foreign Affairs Minister Ahmet Davutoğlu and MİT Undersecretary Hakan Fidan sent successive messages to Assad, however when Ankara's messages were paid no heed, the decision was made to change their stance. A harsh warning was penned immediately after the excessive force used by security forces in Syria following this past Friday's prayer ceremony. As for Ankara, the health and welfare of the Syrian public is a priority.
FIVE ITEM WARNING
The Ministry of Foreign Affairs announced the following warnings Saturday night:
Avoid excessive force and choose the correct method to retaliate mass demonstrations.
Determinedly continue reform efforts, completing them as soon as possible and putting them into effect without wasting any time.
Act in accordance to the literal and spiritual uderstanding of the reforms announced.
Community peace must be facilitated once again, and all action resulting in escalating incidents avoided.
Act with common sense, patience to ensure events do not turn violent.