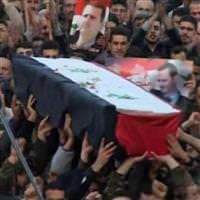 The United States is considering sanctions against Syrian government officials to increase pressure on President Bashar al-Assad to end a violent crackdown on protesters, a U.S. official said on Monday.

The measures, which could freeze the officials' assets and ban them from doing business in the United States, would likely come in an executive order signed by U.S. President Barack Obama, the U.S. official said on condition of anonymity.

But a final decision has yet to be made and there was no word on whether Assad might be a target, the official said.

Sanctions would mark a more assertive approach by the Obama administration, which has been criticized by human rights groups for not doing more to curb Assad's efforts to crush a monthlong uprising against his autocratic 11-year rule.

Obama's response to the Syrian crisis has been limited compared to Washington's role in a NATO-led air campaign against Libyan leader Muammar Gaddafi's forces and its call for his ouster.

Late on Monday, the U.S. State Department said it had ordered nonessential U.S. embassy officials in Damascus and all embassy dependents to leave Syria because of the "uncertainty and volatility" in the country.

"Syrian efforts to attribute the current civil unrest to external influences may lead to an increase in anti-foreigner sentiment," the travel warning said.

Obama spoke by phone with Turkish Prime Minister Tayyip Erdogan and the White House said they expressed deep concern about the violence in Syria.

"The leaders agreed that the Syrian government must end the use of violence now and promptly enact meaningful reforms that respect the democratic aspirations of Syrian citizens," the White House said.

Washington is mindful of its limited ability to influence Damascus, which is already under a set of U.S. economic sanctions and is closely allied with U.S. foe Iran.

The Obama administration is also worried about stoking instability on U.S. ally Israel's borders and wants to avoid another military entanglement in the Muslim world, where it is involved in wars in Iraq and Afghanistan.

Despite that, U.S. officials were looking for new pressure points with Assad as his tanks poured into Deraa, where a human rights activist said at least 18 people were killed.

White House spokesman Jay Carney said the administration was "pursuing a range of possible policy options, including targeted sanctions ... to make clear that this behaviour is unacceptable."

But he declined to say whether measures might be imposed against Assad himself, if Syria's oil industry might be targeted or whether there might be a broader push for U.N. sanctions.

Even as he heaped criticism on Syria's actions, Carney kept a mostly cautious line on Assad's fate and stopped short of urging him to step down. "It is up to the people of Syria to decide who its leader should be," he told reporters.

Obama, sharpening his tone in a statement on Friday, said Syria's crackdown "must come to an end now" and accused Damascus of seeking Iranian help to repress its people.

Assad lifted a 48-year state of emergency on Thursday but activists say violence the following day, when 100 protesters were killed, showed he was not serious about reform.

Questions have been raised whether new U.S. sanctions against Assad and his aides -- like the steps taken against Gaddafi and his loyalists -- would have much tangible impact.

The United States and other Western powers have been trying for two years to woo Assad away from Tehran and encourage the British-trained eye doctor to reach a peace deal with Israel.

The Obama administration sent an ambassador back to Damascus this year. Even while maintaining support for Lebanese Hezbollah and Palestinian Hamas militants, Assad has kept Syria's border with Israel quiet.