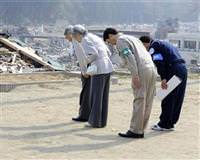 Japanese Emperor Akihito and Empress Michiko met and chatted with survivors of last month's massive earthquake and tsunami Wednesday, offering comfort and solace in a role that has helped keep the country's ancient monarchy relevant in modern times.

Other royals round the globe may be heading off for Friday's wedding of Britain's Prince William and Kate Middleton, but Japan's imperial family has more somber duties at the moment after the March 11 disasters left some 28,000 dead or missing, devastated the northeast region and triggered a nuclear crisis.

Wednesday, Akihito, 77, and Michiko, 76, traveled by train and helicopter to an evacuation center in Fukushima, northeast Japan, where residents fled from both the natural disasters and a nuclear accident at Tokyo Electric Power Co's (TEPCO) plant 240 km (150 miles) from Tokyo.

Later they were to visit Sendai city, further north, and other devastated areas in early May.

The royal couple, Akihito in a windbreaker and Michiko in a belted beige top and grey slacks, knelt to speak with evacuees in the school gymnasium that has become their temporary home.

"I have not seen survivors smiling that way for more than a month and a half. That's how moved everyone was. The older people were crying," Jin Sato, the mayor of the town of Minamisanriku, devastated by the tsunami, told reporters.

It was the sort of scene with which Japan's public has become familiar since the royal pair visited the quake-stricken western port of Kobe in 1995, but one that contrasts sharply with the distant imperial image before defeat in World War Two, when Akihito's father, Hirohito, was considered a living god.

"Until 1945, the Imperial Household would have made some sort of donation. But this sort of role where they literally go out and hug people and comfort people is specific to Akihito and Michiko in particular," said Portland State University Professor Kenneth Ruoff, the author of several books on Japan's royals.

Akihito's sudden appearance in a pre-recorded televised address to the nation five days after the disasters, may have been less comforting, bringing home the severity of a crisis that Prime Minister Naoto Kan has called the nation's worst since World War Two.

Some people were shocked into thinking that the nuclear crisis, now known to be the world's worst since Chrenobyl 25 years ago, might be spiraling out of control.

Akihito has spent much of his two decades on the throne working to close the gap between the imperial family and ordinary Japanese people, and this time was no different.

In a show of solidarity, lights were shut off at the Imperial Palace when parts of the capital suffered planned blackouts due to power shortages, and the hot spring bath at the imperial villa in Nasu, north of Tokyo, was opened to residents of quake-hit areas.

In less sober times, Japanese royals more often make news for the trials and tribulations that come with coping with the strains of life behind a Chrysanthemum curtain.

Empress Michiko, who shattered tradition by becoming the first commoner to marry an heir to the throne in 1959, has struggled over the years from stress-related illnesses.

Crown Princess Masako, a former diplomat, has suffered a similar fate after failing to produce a male heir to one of the world's oldest monarchies.

Whether Masako and Crown Prince Naruhito, first in line to the throne ahead of his nephew, 4-year-old Hisahito, can forge a role that maintains the monarchy's popularity is an open question, complicated by the fact that Masoko's illness restricts her performance of public duties.

"It's like asking whether the United States would get rid of the flag," Ruoff said when asked if Japan's monarchy would survive. "For some it's just some stripes and some stars, but even in a modern world, people need their symbols. I don't see an immediate crisis for them."