Serbia will not meddle in Bosnia affairs 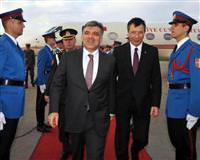 President Boris Tadic said on Tuesday Serbia would not interfere in Bosnia's domestic affairs at a time when Bosnian Serbs are preparing for a referendum challenging the central judiciary system.

"Serbia does not want to meddle into Bosnia's internal affairs," he added.
Serbian Foreign Minister Vuk Jeremic had earlier pledged support for the region's bid to hold a vote questioning the legality of the state court and prosecution. The plan was declared illegal by Western powers. Tadic made his remarks at the Karadjordjevo residency where late Serbian and Croatian presidents Slobodan Milosevic and Franjo Tudjman agreed to carve-up Bosnia 20 years ago.
The Croat and Muslim members of the Bosnian presidency, Zeljko Komsic and Bakir Izetbegovic, had earlier said they would ask Tadic about Serbia's stance towards Bosnia and hopefully start a new era in the relations between the two former rivals.
The referendum, approved by parliament on April 13, is expected to be held within 45 days.
The meeting was mediated by Turkish President Abdullah Gül as part of Turkey's plan to heal relations between Sarajevo and Belgrade, which both want to join the European Union.
"There were painful and tough moments in the past, but … we cannot live in memories of bygone days and we have to turn this into cooperation," Gül said. "Turkey is employing utmost efforts to strengthen that cooperation and see all Balkan countries under one EU and NATO umbrella." Bosnia wants to join NATO while Serbia has declared military neutrality.
Relations between Bosnia, Serbia and Croatia have soured since 2006, mainly because of arrests of officials accused of war crimes committed during the Yugoslav wars of the 1990s.
Nebojsa Radmanovic, the Serb chairman of the Bosnian presidency, said that war crimes indictments from Serbia and Croatia were creating political problems in Bosnia and called for a separate trilateral meeting to resolve the issue.
"We do not want to venture into political issues, but all responsible must face war crimes charges regardless of their name and place of residence," Radmanovic said.