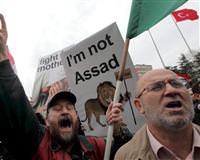 Members of the Syrian opposition meeting in Istanbul on Tuesday pleaded for international help to persuade President Bashar al-Assad to halt a brutal crackdown on a popular revolt.

"Our friends in the West, in Turkey, in the Arab world, if they want to help us, then they can do that by... putting the clearest possible pressure on the Syrian regime to stop targeting civilians," Anas Abdah, the British-based chairman of the Movement for Justice and Development, told Reuters.

Abdah was speaking on the sidelines of a gathering of opposition and rights groups organised by Turkish non-government organisations to highlight the Syrian people's plight.

Hundreds have been killed by Syrian security forces since pro-democracy protests began six weeks ago.

The violence intensified in recent days with an assault on Deraa, the heart of the uprising, but opposition members living in exile took heart from reports of dissent within the army.

"It looks like Bashar al-Assad has taken a strategic decision to crush a non-violent movement in Syria by ordering his brother Maher al-Assad... to go and storm Deraa city," Abdah said.

Maher, regarded as the second most powerful man in Syria, commands the ultra-loyal Fourth Division -- the Syrian Army's equivalent of special forces.

Abdah said he had reports that some army officers from another division, from captains to a lieutenant-general, were trying to stop the Fourth Division from entering the city.

"At this moment of time we have reports that certain elements in the Fifth Division are not responding in the way Bashar and Maher want them to, and are siding with the people," Abdah said.

The Fifth Division is stationed in the south of Syria, on a plain overlooked by the Israeli-occupied Golan Heights, and its ranks are filled with Sunni Muslims.

Syria has been dominated for nearly five decades by an Alawite minority close to Shi'a Islam, and the army's officer corps is dominated by Alawites, though its ranks are mostly Sunni.

"The Syrian army is a national army. They will stand by the people eventually," said Rabhan Ramadan, an Austrian-based Syrian Kurd working with the Haitan Maleh Foundation, a rights group in Brussels.

"Right now we are beginning to see some members of the military refusing to shoot. It is just the beginning, but we expect to see more of that," he added.

Abdah said he was in Istanbul as a representative of signatories of the 2005 Damascus Declaration, which has become an umbrella group for the Syrian opposition and has a programme for political and economic reform.

"However at this moment in time all of this is irrelevant and meaningless if targeting of civilians were to continue by the Syrian regime," he said.

Turkey's President Tayyip Erdogan, who has had friendly relations with Assad, has urged Assad to refrain from using excessive force and to undertake reforms his people are seeking.

The United States is considering targeted sanctions against Assad's government and on Monday, President Barack Obama conferred with Erdogan about the turmoil.

Syrian human rights organisation Sawasiah has estimated at least 400 people have been killed since the uprising began.

Walid Saffour, the London-based president of the Syrian Human Rights Committee, put the toll at more than 700, and added that 5,000 people had been arrested.

Syria has expelled most foreign journalists, and getting independent corroboration of casualties is impossible.

Saffour said he had reports of at least one soldier being executed for refusing to fire on civilians in Deraa, and spoke of some officers and soldiers fleeing to Jordan to seek asylum.