WikiLeaks' Julian Assange is not a criminal 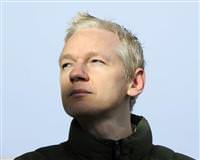 A 24-country poll found that most people believe WikiLeaks co-founder Julian Assange is not a criminal and should not be charged by the U.S. government for releasing thousands of secret U.S. documents.

The poll by Ipsos found 79 percent of people were aware of WikiLeaks and two-thirds of those believed Assange should not be charged and three-quarters supported the group's bid to make public secret government or corporate documents.

U.S. respondents had a far more critical view, with 81 percent aware of WikiLeaks and 69 percent of those believing Assange should be charged and 61 percent opposing WikiLeaks' mission.

The countries found least likely to support legal action against Assange by the U.S. government were South Africa, Germany, Russia and Argentina, while the highest support was in the United States, South Korea, Britain, India and Indonesia.

On Sunday, The New York Times and several other news organizations reported on a cache of classified U.S. military documents provided to them by WikiLeaks that revealed intelligence assessments on nearly all the 779 people who have been detained at the Guantanamo Bay prison in Cuba.

The U.S. military has charged a soldier, Bradley Manning, who is accused of leaking the sensitive documents to WikiLeaks, and U.S. prosecutors are looking at where charges can be brought against Assange.

Assange, an Australian computer expert, is fighting extradition from Britain to Sweden over alleged sex crimes.

Ipsos polled 18,829 adults online between March 2 and March 14 and had a margin of error of 3.1 percentage points.