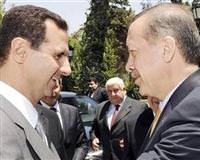 Turkey’s five-item warning issued to Damascus has mobilized Assad. Calling Erdoğan by phone, Assad has assured he will stand behind his words and that reforms will continue.

ANKARA'S WARNING HAS MOBILIZED DAMASCUS
Turkey's public announcement that they have warned Syrian leader Bashar Assad to conduct reforms for the past two years now has mobilized the administration in Damascus.
The first response from Assad after came just yesterday after receiving a series of messages from National Intelligence Agency Undersecretary Hakan Fidan followed by Minister of Foreign Affairs Ahmet Davutoğlu and later Prime Minister Tayyip Erdoğan. In telephone conversations, Prime Minister Erdoğan first spoke with U.S. President Barack Obama and later Assad to question why it is the administration is taking so long to make a move. Assad assured Erdoğan that reforms would continue, however pointed out that the public reaction to security forces in Syria has escalated. Previously, Ankara has stated that they are ready to help if requested, and now they have received the message that support is indeed expected from Turkey in reforms and establishing stability. Damascus has pointed out that the police do not provide enough security for the events transpiring and therefore the military has been engaged as the situation has escalated.

ANKARA TO SEND COMMITTEE TO SYRIA
Turkey's Damascus Ambassador Ömer Önhon who arrived to Ankara to make a presentation to the National Security Council, announced that in light of the work that needs to be done, Syria is expecting not just a representative, but a committee to be sent to Syria. According to sources who attended a high level meeting at the Foreign Ministry regarding Syria, the following assessments have been made:
Syria is not Libya; this is not yet civil war. The events in Syria are street uprisings.
We are concerned regarding events escalating in Syria. Instability in Syria would affect Turkey, Iraq, Jordan, Palestine and Israel.
The international community has not yet told Assad to go.
Assad has delayed the reform process. It is difficult to contain the protesters without using force
Assad and the military have a variance of opinion. The police are not strong enough.
The United States has a differing stance from the EU when it comes to Damascus and is not targetting Assad.
TURKEY ISSUED FIVE WARNINGS TO SYRIA
Refrain from using disproportionate force.
Continue to work on reforms with resolution.
Act in accordance to the literal and sprit of theannounced reforms.
Facilitate community peace once again.
Act with patience to ensure that the events do not turn violent