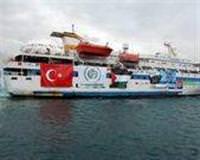 Israel signaled on Wednesday it would intercept a flotilla pro-Palestinian activists plan to send to Gaza for the anniversary of an Israeli raid on a Turkish ship that tried to breach its naval blockade.

The Free Gaza Movement has said 15 vessels with international passengers, including Europeans and Americans, were expected to set sail in late May for the territory, run by Hamas Islamists opposed to peace with Israel.

Nine Turks were shot dead last May 31 during confrontations with Israeli marines who stormed the Turkish vessel Mavi Marmara, part of a flotilla organized by the IHH, a Turkish Islamist charity. The deaths sparked an international outcry.

An official statement issued after the meeting said Netanyahu had ordered the military to "continue the necessary preparations to ensure the blockade is enforced."

He also instructed Israeli diplomats to press on with their efforts to prevent the sailing, the statement said, describing the blockade as a means to prevent weapons smuggling into Gaza.

Two weeks ago, Turkey said Israel had asked it to help stop activists sailing to Gaza on the anniversary of the raid. A Turkish Foreign Ministry official said Ankara told Israel the new flotilla plan was not Ankara's concern.

The IHH, the Turkish Islamist charity that owned the Mavi Marmara, said it would join the "Freedom Flotilla II." It also plans to send its own convoy led by the Mavi Marmara after Turkey's general election on June 12.

In addition to its appeal to Turkey, Israel has asked the United Nations to intervene, charging the flotilla was being organized by what it described as Islamic extremist elements intent on causing violence.