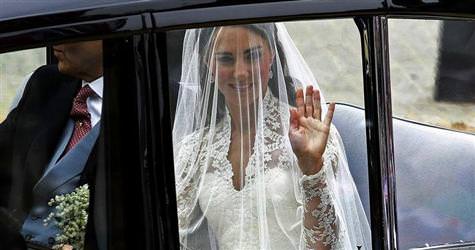 Prince William and his long-term girlfriend Kate Middleton were declared married on Friday at a service in Westminster Abbey.

William, 28, and Middleton, 29, exchanged vows before nearly 2,000 guests in the abbey and a television and internet audience of millions.

They were formally declared married by the Archbishop of Canterbury Rowan Williams, the spiritual leader of the Church of England.

David and Victoria Beckham, the footballer-pop star couple, were among the first celebrities to turn up early at the historic abbey, coronation site for the monarchy since William the Conqueror was crowned in 1066.

A congregation of some 2,000 people, including 50 heads of state as well as charity workers and war veterans who know the prince from military training, gathered for the event that has created a feel-good factor in times of economic gloom.

Thousands of people from around the world were outside the abbey, many of them camping overnight for the best view of the future king and queen.

"As soon as I heard they were getting married, I booked my flight," said Annie Fischer, 36, from Frankfurt, Germany.

"The atmosphere is great, it's great to be here with everyone waiting," she said outside the abbey, where the crowd entered into the festive spirit on a chilly morning by wearing national flags and even fake wedding dresses and tiaras.

Tens of thousands more crammed the flag-lined streets of London to catch a glimpse of marching military bands in black bearskin hats, cavalrymen in shining ornamental breastplates and ornate carriages that will carry royal figures from the service.

A large gathering is also expected outside the queen's London residence, Buckingham Palace, to cheer on the married couple as they appear on the balcony for a much-anticipated public kiss.

For others, however, the biggest royal wedding since William's mother Diana married Prince Charles in 1981 was an event to avoid, reflecting divided opinion about the monarchy.

"It's just a wedding," said 25-year-old Ivan Smith. "Everyone is going mad about it. I couldn't care less."

Buckingham Palace announced on Friday that William had been made the Duke of Cambridge on his wedding day by his grandmother Queen Elizabeth, meaning Middleton becomes Her Royal Highness the Duchess of Cambridge on her marriage.

Palace officials have released virtually every detail of the service, including the music, flowers and the red uniform William will wear as Colonel of the Irish Guards. But the big secret is the identity of the designer of Middleton's dress.

Kathy Martin, an Australian who has lived in London for 15 years, said she had been outside the abbey for two days with only a chair to sleep on just in order to see the dress.

That closely guarded secret will only be known as Middleton steps out of her car and walks into Westminster Abbey to become a royal and begin life in the glare of the media spotlight. A screen was erected at her hotel to protect her from prying eyes.

Fierce appetite for images of the young bride have drawn uncomfortable parallels with William's late mother Princess Diana, who became the world's most photographed woman and died in a car crash after being pursued by paparazzi in Paris.

The royals' cool reaction to Diana's death contrasted with an outpouring of public grief and marked a low point for the monarchy. Some questioned whether the institution, a vestige of imperial glory, had outlived its unifying role in a modern state divided by partisan politics and regional separatisms.

William, 28, has kept the memory of his mother alive -- he gave Middleton his mother's sapphire and diamond engagement ring and Elton John, who attends on Friday, famously sang "Candle in the Wind" at Diana's funeral in the same abbey in 1997.

Also in the abbey on Friday was Charles Spencer, Diana's brother who delivered an outspoken attack on the royal family at the 1997 funeral.

During the wedding, to be streamed live on YouTube, Middleton will not promise to "obey" William as part of her wedding vows, and he will not wear a wedding ring.

The wedding ring is made out of Welsh gold reflecting the couple's links with Wales where they live. Prince Charles is also the Prince of Wales.

After the marriage, the couple are expected to leave the abbey in the 1902 open-topped state landau carriage for Buckingham Palace, where there will be a reception followed by a smaller party for some 300 guests.

About 5,500 street parties will be held across Britain, in keeping with tradition, although they will be more common in the more affluent south of England than in the poorer north.

The marriage between William, second in line to the throne, and 29-year-old Middleton, dubbed "Waity Katie" for their long courtship, has cemented a recovery in the monarchy's popularity.

A series of scandals involving senior royals, Britain's economic difficulties and Diana's death after her divorce from Prince Charles led many to question the future of an institution rooted in the imperial past.

But William's image as a more rounded, less distant figure than his father, and the fact that Middleton, 29, is the first "commoner" to marry a prince in close proximity to the throne in over 350 years, appear to have worked in the monarchy's favour.

William, who is an air force search and rescue helicopter pilot, has invited colleagues who will join armed forces chiefs in the seats of Westminster Abbey.

In a surprise walkabout on Thursday evening which was a break from tradition, the groom reached into the crowds waiting on the Mall, the avenue leading to Buckingham Palace, shaking hands and chatting happily with delighted members of the public.

Some 8,000 reporters and support staff have descended on the capital to capture the occasion in words and images, and, while some question a British government estimate of a global audience of two billion, hundreds of millions are certain to tune in.

A Daily Mail survey showed 51 percent of people believed the wedding would strengthen the monarchy in Britain, compared with 65 percent who said the marriage between Prince Charles and Camilla Parker Bowles in 2005 would weaken it.

However, while the queen, 85, exercises limited power, and is largely a symbolic figurehead in Britain and its former colonies, critics question the privileges she and her family enjoy, particularly at a time when the economy is so weak.

The monarchy officially costs the British taxpayer around 40 million pounds a year, while anti-royalists put the figure at closer to 180 million pounds.

William faces a long wait for the throne, however -- his grandmother Queen Elizabeth shows little sign of slowing down at 85 and his father Charles is a fit and active 62-year-old.