Tornadoes tear across South, killing over 300 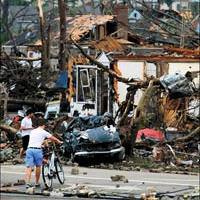 Tornadoes and violent storms tore through seven Southern states, killing at least 306 people and causing billions of dollars of damage in one of the deadliest swarm of twisters in U.S. history.

President Barack Obama described the loss of life as "heartbreaking" and called the damage to homes and businesses "nothing short of catastrophic." He promised strong federal support for rebuilding and plans to view the damage on Friday.

Over several days this week, the powerful tornadoes -- more than 160 reported in total -- combined with storms to cut a swath of destruction heading west to east. It was the worst U.S. natural disaster since Hurricane Katrina in 2005, which killed up to 1,800 people.

In some areas, whole neighborhoods were flattened, cars flipped over and trees and power lines felled, leaving tangled wreckage.

While rescue officials searched for survivors, some who sheltered in bathtubs, closets and basements told of miraculous escapes. "I made it. I got in a closet, put a pillow over my face and held on for dear life because it started sucking me up," said Angela Smith of Tuscaloosa, Alabama, one of the worst-hit cities.

"We even rescued two babies, one that was trapped in a crib when the house fell down on top of the baby," Roper said in an interview on PBS NewsHour.

Tornadoes are a regular feature of life in the U.S. South and Midwest, but they are rarely so devastating.

Wednesday was the deadliest day of tornadoes in the United States since 310 people lost their lives on April 3, 1974.

Given the apparent destruction, insurance experts were wary of estimating damage costs, but believed they would run into the billions of dollars, with the worst impact concentrated in Tuscaloosa and Birmingham.

"In terms of the ground-up damage and quite possibly the insured damage, this event will be of historic proportions," Jose Miranda, an executive with the catastrophe risk modeling firm EQECAT, told Reuters.

'ONE OF THRE WORST'

"I think this is going to rank up as one of the worst tornado outbreaks in U.S. history," said Federal Emergency Management Agency director Craig Fugate.

Fugate spoke in an interview with CNN from Alabama, where his agency said the tornadoes killed at least 204 people. There were still unconfirmed reports late on Thursday of "entire towns flattened" in northern parts of the state, Fugate said.

"We're still trying to get people through rescues and locate the missing," he said.

In preliminary estimates, other states' officials reported 33 killed in Mississippi, 34 in Tennessee, 11 in Arkansas, 14 in Georgia, eight in Virginia and two in Louisiana.

The mile-wide monster twister that tore on Wednesday through Tuscaloosa, home to the University of Alabama, may have been the biggest ever to hit the state, AccuWeather.com meteorologist Josh Nagelberg said.

Obama said he would visit Alabama on Friday to see the damage and meet the governor. He declared a state of emergency for Alabama and ordered federal aid.

"I want every American who has been affected by this disaster to know that the federal government will do everything we can to help you recover, and we will stand with you as you rebuild," Obama said at the White House.

The Browns Ferry nuclear power plant in Alabama was expected to be shut for days, possibly weeks, as workers repaired damaged transmission lines.

But the backup systems worked as intended to prevent a partial meltdown like the nuclear disaster in Japan.

The rampaging tornadoes and violent storms destroyed 200 chicken houses that held up to 4 million chickens in Alabama, the No. 3 U.S. chicken producer.

They also battered a local coal mine.

Up to 1 million people in Alabama were left without power.

Daimler said it had shut down its Mercedes-Benz vehicle assembly plant in Tuscaloosa until Monday due to the tornadoes, but the plant itself sustained only minor damage.

Some of the worst devastation occurred in Tuscaloosa, a town of about 95,000 in the west-central part of Alabama, where at least 37 people were killed, including some students.

"It sounded like a chain-saw. You could hear the debris hitting things. All I have left is a few clothes and tools that were too heavy for the storm to pick up. It doesn't seem real," said student Steve Niven, 24.

"I can buy new things but you cannot replace the people. I feel sorry for those who lost loved ones," Niven told Reuters.

The campus of the University of Alabama, home of the famous Crimson Tide football team, was not badly damaged, but some students were killed off campus, Bentley said.

Shops, shopping malls, drug stores, gas stations and dry cleaners were all flattened in one section of Tuscaloosa.

Among the Alabama counties affected was Jefferson, which is struggling to avert what would be the largest bankruptcy in municipal history over a $3.2 billion bond debt.

The county suffered "widespread damage," a local emergency spokesman said, and at least 17 people were killed.