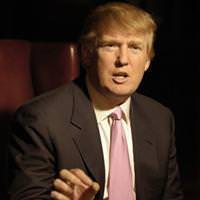 He was ribbed by President Barack Obama, called a racist by David Letterman, accused of being a draft dodger and gave an expletive-laced political speech.

All in all, the headlines in recent days were not kind to property mogul and reality TV star Donald Trump, who is running high in polls among potential Republican presidential candidates.

Presidential historian and author Chester Pach said it was a terrible week for Trump, who he said revealed more of his "foolishly simplistic ideas."

"Donald Trump is not a serious candidate," Pach said. "This is just another chapter in a life long connected with tabloid headlines whether it is his hair, his marriages, his bankruptcies or now his presidential aspirations."

"But from Donald Trump's perspective, I expect any week in which he got a lot of publicity is a good week. The rating for his TV show will go up, his show may get renewed," said Pach of Ohio University. "But my guess is by summer he will have faded from presidential talk."

A political spokesman for Trump, who is considering a race for the White House in 2012, had a more positive take on events.

"Mr. Trump had an amazing week," Michael Cohen told Reuters. "This week, voters turned out in their droves in New Hampshire to tell him, 'Please run! You are our savior!' If that doesn't constitute a good week, what does?"

Trump's trip to New Hampshire, the first primary voting state, has added to buzz he may run. But some think it is all a publicity stunt for his "Celebrity Apprentice" reality TV show.

On Wednesday, Obama chided Trump at a fund-raiser after releasing his long-form birth certificate to address Trump-fueled talk he was not born in the United States and therefore ineligible to be president.

"What we do in politics is not a reality show. It's serious," Obama said in a veiled reference to Trump's reality TV role where he utters his catch phrase, "You're fired."

The billionaire businessman also made news for a speech in Las Vegas on Thursday night in which he called U.S. political leadership "stupid" and used an obscenity several times, including in a reference to taxing Chinese imports.

"Mr. Trump is a patriot," said Cohen. "Nothing gets him madder than watching America fall apart in front of his nose."

Cohen also said CBS "Late Show" host Letterman "should be ashamed of himself" for calling Trump a racist on Thursday for questioning Obama's citizenship and his grades at Harvard.

The Smoking Gun website reported on Thursday that Trump dodged the Vietnam War due to a medical deferment, not a high draft number, as he has said. Cohen said the report mischaracterized the facts and used documents out of context.