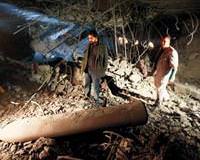 Muammar Gaddafi pressed an offensive against rebel forces, and his supporters burned Western embassies after the Libyan leader survived a NATO airstrike that officials said killed his son and three grandchildren.

Funerals were expected to be held on Monday, an occasion that might bring an awaited appearance or declaration by Gaddafi who authorities say was in the Tripoli house when it was destroyed by at least three missiles late on Saturday.

Gaddafi, fighting a rebellion against his authoritarian 41-year rule since mid-February, has not been seen in public since the attack, though a spokesman said he was unhurt. His son Saif al-Arab, 29, was killed with three young grandchildren.

The embassies of Britain and Italy were attacked and burnt, along with the U.S. commercial and consular affairs department after Gaddafi loyalists were shown on Libyan television vowing vengeance. The buildings had been vacated weeks earlier.

Deputy Foreign Minister Khaled Kaim said the strikes were a fourth attempt to assassinate Gaddafi. He denied allegations in some media that the deaths had been fabricated to discredit NATO. The alliance said it hit a command and control centre.

Any appearance of an assassination attempt against Gaddafi is likely to lead to accusations the British and French-led strikes are exceeding the U.N. mandate to protect civilians.

French surgeon Gerrard Le Clouerec, who does not work for the Libyan government, was asked to independently identify the bodies of Saif al-Arab and two children. He said all three had died due to a blast. He said the children's faces had been obliterated by the blast so they were difficult to identify.

Le Clouerec said he also saw the body of a young man of about 30, with a beard and a thin moustache whose face matched a photograph he had been shown of Saif al-Arab.

Gaddafi's forces fired rockets at the port in Misrata on Sunday as an aid ship was trying to unload, rebels said, and the shelling forced two other vessels to wait offshore. The port is the lifeline for Misrata which has been under siege for weeks.

"Shelling the port is disastrous for us because it will sabotage all the humanitarian aid we are getting," said rebel spokesman, Ahmed Hassan. "God help us if this happens. God protect our port."

Libyan state television said the port was shelled to stop NATO from delivering weapons to the insurgents. The rebel spokesman said that was a lie.

Rights groups say hundreds of people, including many civilians, have been killed in Misrata, about 200 km (130 miles) east of Tripoli. Officials in Tripoli deny targeting civilians, and say they are fighting armed gangs and al Qaeda sympathisers.

Rebels have repelled government troops from the centre of Libya's third largest city in recent days and now say they have gone on the offensive to try to capture Misrata airport.

The frontline in eastern Libya has been static west of the town of Ajdabiyah for a week with government troops digging in and rebels attempting to train and regroup.

In the west, Libyan government forces are fighting to dislodge rebels from the Western Mountains after they seized control last month of the Dehiba-Wazin crossing, opening a passage for food, fuel and medicine.

The sound of heavy bombardment and small arms fire echoed through the mountains on the Libyan side of the border.

Artillery shells fell on and around the town of Dehiba on the Tunisian side of the border, residents told Reuters, the site of an incursion on Friday by forces loyal to Gaddafi that provoked fury in Libya's western neighbour.

Refugees poured across the border into Tunisia on Sunday.

"I never thought I would have to leave my house but today, at the age of 80, I find myself forced to flee with my family, without taking any possessions and without knowing where I'm going to stay here in Tunisia," said a Libyan man who fled the rebel-held town of Zintan.

Britain expelled the Libyan ambassador and Italy condemned the attack on its embassy as a grave and vile act. Most Western countries closed their embassies in Tripoli before the NATO military intervention began several weeks ago.

Deputy Foreign Minister Kaim called the attacks on the embassies "a regrettable action. These actions happened after 3:30 in the morning. That's why our police force were outnumbered by the number of demonstrators."

The United Nations withdrew its international staff from Tripoli after a crowd entered their compound.

"A crowd of people entered a U.N. compound and some vehicles were taken. All U.N. staff are safe and accounted for," Martin Nesirky, a U.N. spokesman, said. "The decision to leave the country was based on the overall security situation in Tripoli."

The U.N. sent international staff to Tripoli only last month after it reached an agreement with the Libyan government on a humanitarian presence. These staffers would now cover Western Libya from neighbouring Tunisia, the United Nations said.

"They have the right to do so because of what happened this morning," Kaim said. "My understanding is it is a temporary withdrawal."