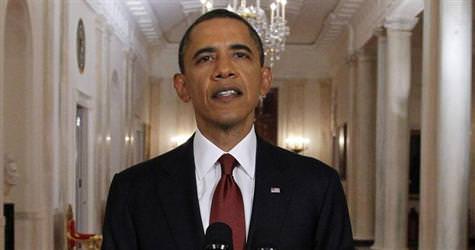 Al Qaeda leader Osama bin Laden was killed in a firefight with U.S. forces in Pakistan on Sunday, President Barack Obama announced, ending a nearly 10-year worldwide hunt for the mastermind of the September 11 attacks.

"Justice has been done," Obama said in a hastily called, late-night White House speech revealing the death of the elusive head of the militant Islamic group behind a series of bloody attacks in cities across the world.

His death, confirmed by officials in Pakistan, was a huge symbolic blow to al Qaeda, which has been beaten back but is still a threat in many countries.

It prompted jubilant flag-waving celebrations in Washington and New York. It was the biggest national security victory for Obama since he took office in early 2009 and could give him a political boost as he seeks re-election in 2012.

Obama may now find it easier to wind down the nearly decade-old war in Afghanistan, begun after the September 11, 2001, attacks on New York and Washington that killed nearly 3,000.

But the operation could complicate relations with Pakistan already frayed over U.S. drone strikes in the west of the country and the jailing of a CIA contractor accused of killing two Pakistani men.

Obama said U.S. forces led a targeted operation that killed bin Laden in a compound in Abbotabad north of Islamabad. No Americans were killed in the operation and they took care to avoid civilian casualties, he said.

A senior administration official said it was believed that three adults besides bin Laden were killed, including an adult son of bin Laden.

Thousands of people gathered outside the White House, waving American flags, cheering and chanting "USA, USA, USA." Car drivers blew their horns in celebration and people streamed to Lafayette Park across from the street, as police vehicles with their lights flashing stood vigil.

"I'm down here to witness the history. My boyfriend is commissioning as a Marine next week. So I'm really proud of the troops," Laura Vogler, a junior at American University in Washington, said outside the White House.

Many Americans had given up hope of ever finding bin Laden after he vanished in the mountains of Afghanistan in late 2001.

"The United States has conducted an operation that killed Osama bin Laden, the leader of al Qaeda and a terrorist who is responsible for the murder of thousands of men, women and children," Obama said.

Former President George W. Bush, who vowed to bring bin Laden to justice "dead or alive" but never did, called the operation a "momentous achievement" after Obama called him with the news.

Martin Indyk, a former U.S. assistant secretary of state for near eastern affairs, described bin Laden's death as "a body blow" to al Qaeda at a time when its ideology was already being undercut by the popular revolutions in the Arab world.

Other experts were more cautious. "It changes little in terms of on-the-ground realities -- by the time of his death bin Laden was not delivering operational or tactical orders to the numerous al Qaeda affiliates across the world," said Rick Nelson of the Center for Strategic and International Studies in Washington.

Statements of appreciation poured in from both sides of Washington's often divided political divide. Republican Senator John McCain declared, "I am overjoyed that we finally got the world's top terrorist."

Said former President Bill Clinton: "I congratulate the president, the national security team and the members of our armed forces on bringing Osama bin Laden to justice after more than a decade of murderous al Qaeda attacks."

Having the body may help convince any doubters that bin Laden is really dead.

The United States is ensuring that bin Laden's body is being handled in accordance with Islamic practice and tradition, a U.S. official said.

Bin Laden had been the subject of a search since he eluded U.S. soldiers and Afghan militia forces in a large-scale assault on the Tora Bora mountains of Afghanistan in 2001.

The trail quickly went cold after he disappeared and many intelligence officials believed he had been hiding in Pakistan.

While in hiding, bin Laden had taunted the West and advocated his militant Islamist views in videotapes spirited from his hideaway.

Besides September 11, Washington has also linked bin Laden to a string of attacks -- including the 1998 bombings of American embassies in Kenya and Tanzania and the 2000 bombing of the warship USS Cole in Yemen.