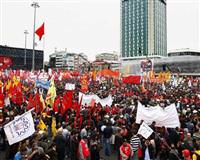 Turnout at May Day parades in France on Sunday was lower than last year, government figures showed, with enthusiasm on the wane after huge street protests last year failed to stop an unpopular pension reform.

The Interior Ministry said 77,000 people showed up for marches in 200 locations, versus 195,000 last year. France's largest labour union, the CGT, told Reuters that 120,000 protesters had participated in the annual marches.
Millions marched for weeks late last year against President Nicolas Sarkozy's overhaul of the pension system, only to see the reform go through with few concessions granted.
Still, Sarkozy's popularity suffered badly, denting his chances of re-election in a presidential election next April.
In Greece also, fewer people took part in May Day rallies against austerity compared to previous years, and labour unions say a planned strike later in the month will better reflect public discontent over belt-tightening. Cuts in public sector pay and pensions along with higher indirect taxes to slash deficits have exacerbated the economic downturn as Athens scrambles to cope with a debt crisis and meet tough fiscal targets under a 110 billion euro EU/IMF bailout. Police said it was the lowest turnout in the last years with about 5,000 people demonstrating peacefully in central Athens but labour unions said participation was higher at about 12,000. "Today there was mostly a symbolic rally to honour those who fought for workers' rights. We are calling on people to take to the streets on May 11 to say no to policies that are making us poorer," Ilias Iliopoulos, general-secretary of public sector union ADEDY told Reuters.

French protesters voiced anger over reduced buying power, high unemployment -- measured at 9.6 percent at the end of the fourth quarter, 2010 -- and job cuts in the public sector, while showing support for popular uprisings across the Arab world.

France has avoided British-style austerity measures in the wake of the global economic crisis. But Sarkozy has still pushed through a salary freeze for public sector workers and raised the minimum retirement age by two years to 62 -- infuriating voters.
The conservative president is struggling to improve his dismal poll ratings, while his main rival on the far-right, National Front party head Marine Le Pen, has grown more popular.
In Greece, with unemployment climbing to a record high of 15.1 percent in January, ADEDY and sister private sector union GSEE are set for a 24-hour strike on May 11, the second this year, to protest against government policies squeezing incomes.
After the rallies there were minor scuffles between police and a small group of self-proclaimed anarchists in the bohemian district of Exarhia in central Athens.
In Turkey, thousands of union members and leftist political activists gathered on Sunday in Istanbul's Taksim Square for a second year of May Day celebrations.
May Day rallies have been banned in Taksim Square since army generals swept into power in 1980. Until last year, groups attempting to march to the square to mark May Day were prevented from doing so by police, often resulting in clashes.
Dozens of people were shot by an unknown gunman or trampled to death in May Day demonstrations in Taksim Square in 1977.
And in Iraq, hundreds of people, many of them members of the Iraqi Communist Party, demonstrated in the capital Baghdad to press for more jobs and equal labour rights for women. Thousands of Iraqis, inspired by uprisings elsewhere in the Arab region, have taken to the streets in recent months to press for better basic services and an end to corruption. Demonstrators, many carrying red flags associated with Iraq's communist party, marched peacefully in Baghdad's central Firdous Square, chanting "First of May is the day for workers," referring to Sunday's Labour Day holiday.
Some carried banners which read "legislate new democratic and fair labour law" and "enough of injustice, where are labourers' rights?" Eight years after the U.S.-led invasion which toppled dictator Saddam Hussein, Iraq remains slow to get back on its feet and rebuild an economy crushed by war and sanctions. Around 23 percent of the population lives below the poverty line, according to the Ministry of Planning. The official unemployment rate sits at 15 percent and another 28 percent work part time, while women make up a small part of the work force.
Last Update: May 02, 2011 11:24 am
RELATED TOPICS