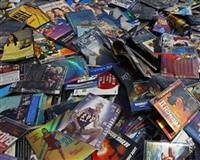 The United States kept Russia on Monday on its list of countries with the worst records of preventing copyright theft for the 14th straight year and said China was on the list for the seventh year.

The Trade Representative's office also issued an "open invitation" to the dozens of countries listed in the report to work together on a plan to resolve U.S. concerns.

"This year's Special 301 Report comes with a call to action for our trading partners. We are ready to work intensively with you to stop intellectual property theft that threatens IP-related jobs in the United States and other countries," Trade Representative Ron Kirk said in a statement.

An estimated 18 million Americans work in software, music, movie and other industries that depend on strong enforcement of copyright and other intellectual property rights, the USTR said.

Canada, India and eight other countries joined Russia and China on the annual "priority watch list." It carries no threat of sanctions, but hopes to shame governments into cracking down on piracy and updating their copyright laws.

"Today's report is a springboard for ambitious and collaborative partnerships in the coming year to strengthen protection for the innovation and creativity that drive jobs and exports for the United States and our partners around the world," Kirk said.

The International Intellectual Property Alliance, a U.S. coalition of film, software, music and publishing groups, estimates that U.S. companies lost more than $15 billion in 2009 due to international copyright theft.

About $14 billion of the total was due to software piracy, with an estimated $3.5 billion in losses in China and $1.4 billion in Russia.

USTR identified a number of concerns in China, including the country's "indigenous innovation" policies that call on U.S. companies to transfer valuable technology to participate in the Chinese market.

It saw some "early signs of progress" in fighting online piracy in China, but said more work needs to be done there with an estimated 457 million Internet users and reports that 99 percent of all music downloaded is illegal.

Russia, which hopes to join the World Trade Organization this year, was kept on the priority watch list for a number of "ongoing concerns, particularly with respect to piracy over the Internet and enforcement generally," USTR said.

The report criticized Canada for failing to enact long-awaited copyright legislation and urged the northern U.S. neighbor and major trading partner to take stronger efforts, including at the border, to stop intellectual property theft.

"Canada stands virtually alone among developed economies in failing to bring its laws up to global minimum standards for the digital networked environment," the International Intellectual Property Alliance said.