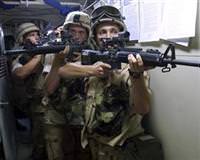 U.S. special forces set out to kill Osama bin Laden and dump his body in the sea to make it harder for the al Qaeda founder to become a martyr, U.S. national security officials told Reuters on Monday.

"This was a kill operation," one of the officials said.

"If he had waved a white flag of surrender, he would have been taken alive," the official added. But the operating assumption among the U.S. raiders was that bin Laden would put up a fight -- which he did.

Bin Laden "participated" in a firefight between the U.S. commandos and residents of the fortified mansion near the Pakistani capital Islamabad where he had been hiding, the official said.

The official would not explicitly say whether bin Laden fired on the Americans, but confirmed that during the course of the 40-minute operation the U.S. team shot bin Laden in the head.

Three other men and a woman, who U.S. officials said was used as a human shield, lay dead after the raid, but no Americans were killed.

A senior Obama administration official said the commandos knew that bin Laden probably would be killed rather than captured.

"U.S. forces are never in a position to kill if there is a way to accept surrender consistent with the ROE (rules of engagement). That said, I think there was broad recognition that it was likely to end in a kill," the administration official said.

The operation was carried out by a team of about 15 special forces operatives -- most, if not all, U.S. Navy Seals, according to U.S. officials familiar with the details. They indicated the team was based in Afghanistan.

One official said it included forensic specialists whose job was to collect evidence proving that bin Laden was caught in the raid and intelligence that might be useful in tracking down other al Qaeda leaders or foiling ongoing plots.

It was done so that bin Laden's dead body would not become a symbol of veneration or inspiration for would-be militants, U.S. officials said.

"You wouldn't want to leave him so that his body could become a shrine," one of the officials said.

Captured militants, including some held at the U.S. military prison at Guantanamo Bay in Cuba, told intelligence officials of a particular al Qaeda "courier" whom they had heard was close to bin Laden.

Initially U.S. intelligence did not know either the name or whereabouts of the courier. But officials said that about four years ago, U.S. agencies learned the individual's name.

Two years ago, U.S. intelligence received credible information indicating that the courier and his brother, another suspected militant operative, were operating somewhere near Islamabad.

Then, last August, the U.S. pinpointed the compound in Abbotabad where intelligence indicated the two brothers, their families, and a third large family were living.

It was located in a ritzy neighborhood at the end of a dirt road, not far from one of Pakistan's principal military academy. Other residents of the area included retired Pakistani military officers.

Working with the National Geospatial-Intelligence Agency (NGA), which analyzes pictures from spy satellites and aircraft, and the National Security Agency, which conducts electronic eavesdropping, the CIA concluded that the compound was built with unusual security features -- including high-walls topped with barbed-wire -- and that its inhabitants appeared to take unusual security precautions.

By earlier this year, the CIA believed that it had "high confidence" that a "high-value" al Qaeda target was at the Abbotabad compound, and a strong probability that this target was bin Laden.

But one official said the agency was never "100 percent certain" that bin Laden was the one who was hiding out.