Live broadcast from the crisis room 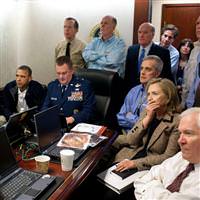 United States President Obama and his staff witnessed the ‘Geronimo operation’ on Osama Bin Laden, as it unfolded live from a bulletproof chamber in the White House.

The U.S. team of Special Forces had cameras in their helmets which broadcasted the raid conducted in Pakistan on Osama Bin Laden live through satellite to the White House. Obama and his staff watched Laden's death second by second in a super secure area of the White House referred to as the 'Situation Room.'
THE WORDS 'GERONIMO IS DEAD' BROUGHT A SIGH OF RELIEF
Obama, who at one point was biting his nails in excitement, said "we got him" once he heard the words 'Geronimo is Dead.' National Security Advisor Brennan announced on live broadcast, "Minutes passed like days. It was probably one of the most anxiety-filled periods of time." Brennan also inferred that had the operation been unsuccessful it could have had negative political repercussions for Obama.
The world's most sought after terrorist and the mastermind of the September 11th attacks, Osama Bin Laden in death has once again become the hottest topic on the agenda worldwide…

Meanwhile details of the operation are now coming forth. The raid on a luxurious village protected like a castle in Abbottabad, Pakistan, was witnessed live in real time by the White House. Obama was joined by Hillary Clinton, Minister of Defense Gates, Vice President Biden and National Security Advisor Brennan. It all began with information obtained through 'torture. The following are the behind the scenes details of the raid that killed the world's most wanted terrorist:

TORTURE FORCED THEM TO TALK

The first step of what was to become a historical operation began with accessing Osama Bin Laden's private courier and right hand man. Right after the September 11th terrorist attacks, the CIA acquired information from a secret jail in Eastern Europe of a courier who was said to be very close to Osama Bin Laden who went by the name Abu Ahmed al-Kuwaiti. Certain Al Qaeda members captured by the United States had no knowledge of Laden's whereabouts however they did verify the presence of a courier who delivered news to Laden who went by the name Kuwaiti. The CIA later used 'waterboarding' techniques a total of 183 times on the Al Qaeda's number three man Halid Sheikh Muhammed who was being held in Guantanamo. Muhammed gave in on the 184th time and verified that he did in fact know the courier in question. In 2004, the CIA used the same questioning technique to acquire information from a high level Al Qaeda member Hasan Gül who stated that he knew al-Kuwaiti was an important courier for the organization and was very close to Faraj al-Libi who took over command for Muhammed. Al Libi, who was captured in 2005 and questioned, testified to receiving information that he had been appointed to Muhammed's position through this courier.


A TELEPHONE CONVERSATION REVEALS COURIER'S WHEREABOUTS
Realizing that reaching the courier al Kuwaiti was equivalent to reaching Laden, CIA agents decided to expedite their search for the courier, whose real name was Sheikh Abu Ahmed. Al Qaeda leader Laden was untraceable by the American National Security Agency because he did not allow anyone to use telephones or computers when in his vicinity. However, al Kuwaiti blew his cover when he held a telephone conversation with someone who was being tracked by American intelligence. It was this conversation that led to U.S. intelligence being able to track the infamous courier. Last August the courier went to the very house Laden was shot in, which used to be resided in by al-Libi. Intelligence officials had been aware of the existence of this home for years however the only information they had was that Ladin's heavily armed security were stationed there. The comings and goings of the courier and taking into consideration the excessive security measures in place resulted in the opinion, that a very important person was being housed in the resident, gaining validity in the month of February. In the final days of April, Obama and the National Security Council held five 'top secret' meetings in the White House. On Sunday evening, the button was pressed for "Operation Geronimo" (the last Native American to fight with the U.S.).
Using satellite imaging, it was determined that Ladin's family were located on the second and third floor of the building. Accompanied by a specially trained dog, a naval commando team of 79 encircled the one million dollar mansion. Within minutes, the Special Forces team had raided the house and headed towards the room they believed Laden was hiding out in. Within seconds, armed conflict began. First the courier Kuwaiti and his brother were killed and Laden was shot directly above his left eye. A part of his skull was cracked from the bullet. The commandos decided to shoot a second bullet in his chest to make sure he had really been killed. Within forty minutes' time, bin Ladin's body was removed from the premises, and when a soldier verified bin Ladin's death through his identification, he sent the message that 'Geronimo' had been killed.
Support for Obama increases by 13 percent
According to the research company, known for its affiliation to the Republican Party, Public Opinion Strategies (POS) issues pertaining to national security tend to seriously affect presidential support. POS announced yesterday that after Osama's capture, presidential support increased by 13 percent.